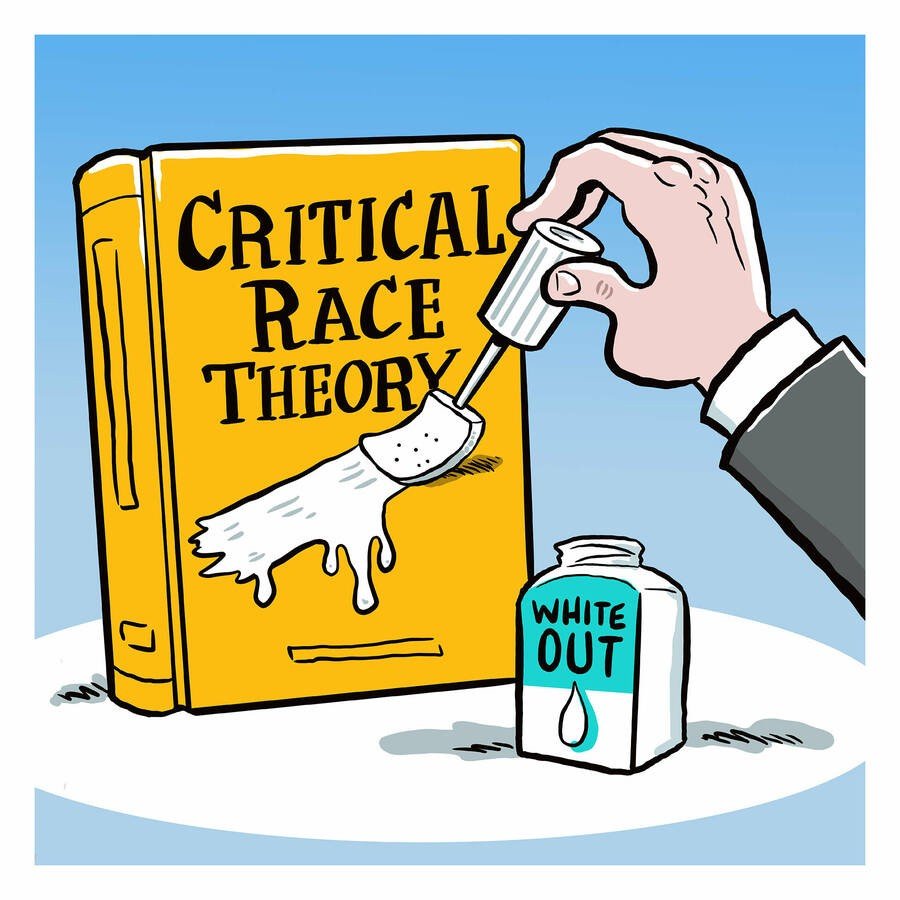 From the Left-The Daily Commercial: Critical race theory is not taught here, but real history belongs

This is just one of many education bills DeSantis signed into law meant to fuel the ire of those whose “truth” is rooted in conspiracy theories and white-washed history.

It became apparent at a recent school board meeting that some of these individuals live in Lake County.

Like “Fiscal Ranger” Vance Jochim, who forewarned the district to watch out for the evils of CRT. His supporting sources from which he gleaned his “facts” came from, and I quote, “Youtube videos.”

William Comer opened his statement to the board with a Shakespeare quote, “Lord, what fools these mortals be.” During his subsequent rant he addressed the language arts textbook adoption like it was the White Album being played backwards. He claimed there were several English teachers who reviewed the book “last week” and found clandestine “CRT…all over that book.” He lamented it was being kept from teachers “because they don’t want us to see it.”

Ironic because, months ago, each English department in the district provided teachers with samples and logins of three different text collections to analyze how well they support the new standards. Both myself and my grade-level conservative counterpart agreed that StudySync, the collection chosen, is a comprehensive and edifying tool with literature from outstanding authors such as Homer, Poe, Angelou, Hughes, and Shakespeare, who once said, “A fool thinks himself to be wise, but a wise man knows himself to be a fool.”

I must agree, at least in part, with Comer and several of those who attended that June 14 meeting. We should be concerned about the lack of respect for the flag and our constitution.

I stand for the flag. I stand out of respect for my grandfather and those who sacrificed their lives for our country. He was a paratrooper at Normandy during WWII. My Dad was four when he was informed his father would never make it home. I never got to meet my grandfather.

Standing for the flag is the least I can do.

I do not know if I would be standing for the flag if I never met my grandfather because he had been violently yanked from his bed by a White supremacist mob who mutilated, then hanged his battered body from the nearest tree. All because he came back from WWII seeking the same treatment his white, fellow soldiers received upon arriving stateside. I do not know if I would stand for the flag if my grandfather was Charles Greenlee or Walter Irvin, or Mose Norman or Julius Perry.

And I am grateful that our forefathers recognized the need to redress grievances in a peaceful manner by including that right in the Constitution. So, if some principal or teacher wants to take a knee on their own time to bring attention to the continued racial disparities in this country, I say, carry on. That is not the phantom CRT. It is a respective right under the constitution for which my grandfather fought and died.

Teaching students the truth about our country’s racist history is not, as DeSantis claims, “teaching children to hate their country” under the guise of CRT. It is simply, well, the truth. Our nation is a woven tapestry of dark and light, of good and evil, of love and hate, of grave failures and great successes.

It is teaching that the Constitution and its subsequent amendments underscore that all citizens, of all races and creeds, are welcome to life, liberty, and the pursuit of happiness. It is teaching that we must honor those differences that throughout history have joined us together to create the mightiest nation in the world. Anything else is whitewashed.

Perhaps this whole CRT debacle is best summed up in a quote by Mae Hazelton made at a later school board meeting. Hazelton, a graduate of the first integrated class of Tavares High School stated, “Let us not be polarized by fear mongering. Our children deserve better, and I bet you, our children actually know better.”