This Confederate Statue is not welcome in Lake County. It does not belong here. Here is how you can say NO! 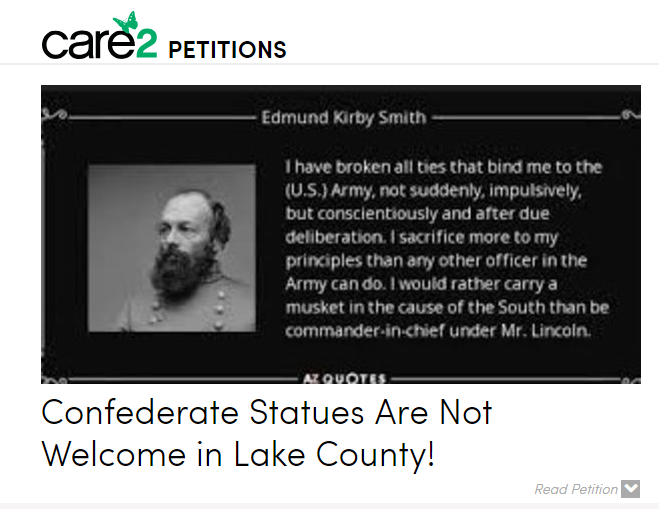 The plan to move a Confederate statue to Lake County and install it in the former headquarters of the infamous Sheriff Willis McCall is still moving forward. However, the forum for debate is shifting from the County Commission to the towns and cities of Lake County. Tomorrow (Wednesday), the issue lands in Tavares.
From the August 14 Daily Commercial:

What you can do:
(1) Attend the Tavares City Council meeting at 4 pm, Wednesday, August 15
Tavares City Hall,  201 E. Main Street, Tavares, FL 32778
(2) If you are a resident of Tavares, consider sending an email to individual city council members. Remember to be clear, concise and civil … our effort is to educate, encourage and persuade. Here is a link to their city email addresses:
https://www.tavares.org/319/City-Council
SIGN THE PETITION!
https://www.thepetitionsite.com/947/838/489/confederate-statues-are-not-welcome-in-lake-county/
From the Care2 petition site:
2,000 GOAL
Curator Bobby Grenier’s decision to bring a Statue of the Confederate General Edmund Kirby Smith to our Lake County Historical Museum is a blatant disregard for improving race relations between the residents of Lake County. As you can see, the General fought against everything Lake County believes in, “Equality For All”!
We, the citizens of Lake County oppose the Confederate statue because:
1)      General Smith has no connection to Lake County.
2)      Transporting the statue to Lake County costs $10,000.
3)      The transportation expenditure should be used to provide educational opportunities for children and adults about Lake County history.
4)      General Edmund Kirby Smith’s birthplace, St Augustine, Florida, refused to accept the statue.
5)       The City of Eustis rejected the statue.
6)      Since the shooting deaths of nine African American worshippers at a historic African American Church in Charleston, South Carolina in 2015, there has been a national backlash against Confederate symbols and statues, and many are being removed or replaced.
7)      The legislature voted to replace General Edmund Kirby Smith from Statuary Hall in Washington, D. C. and replace him with a bust of Dr. Mary McLeod Bethune, Founder of Bethune Cookman College in Daytona Beach, Florida.
8)      The MLK Commemoration Committee wholeheartedly agrees with our legislature and the Black Community. We do not want General Edmund Kirby Smith in Lake County.
9)      Since there is no historical connection or beneficial significance with the statue being placed in Lake County, there is no logical reason to bring a controversial item to our county, which must be transparent and open-minded regarding issues affecting everyone in Lake County.