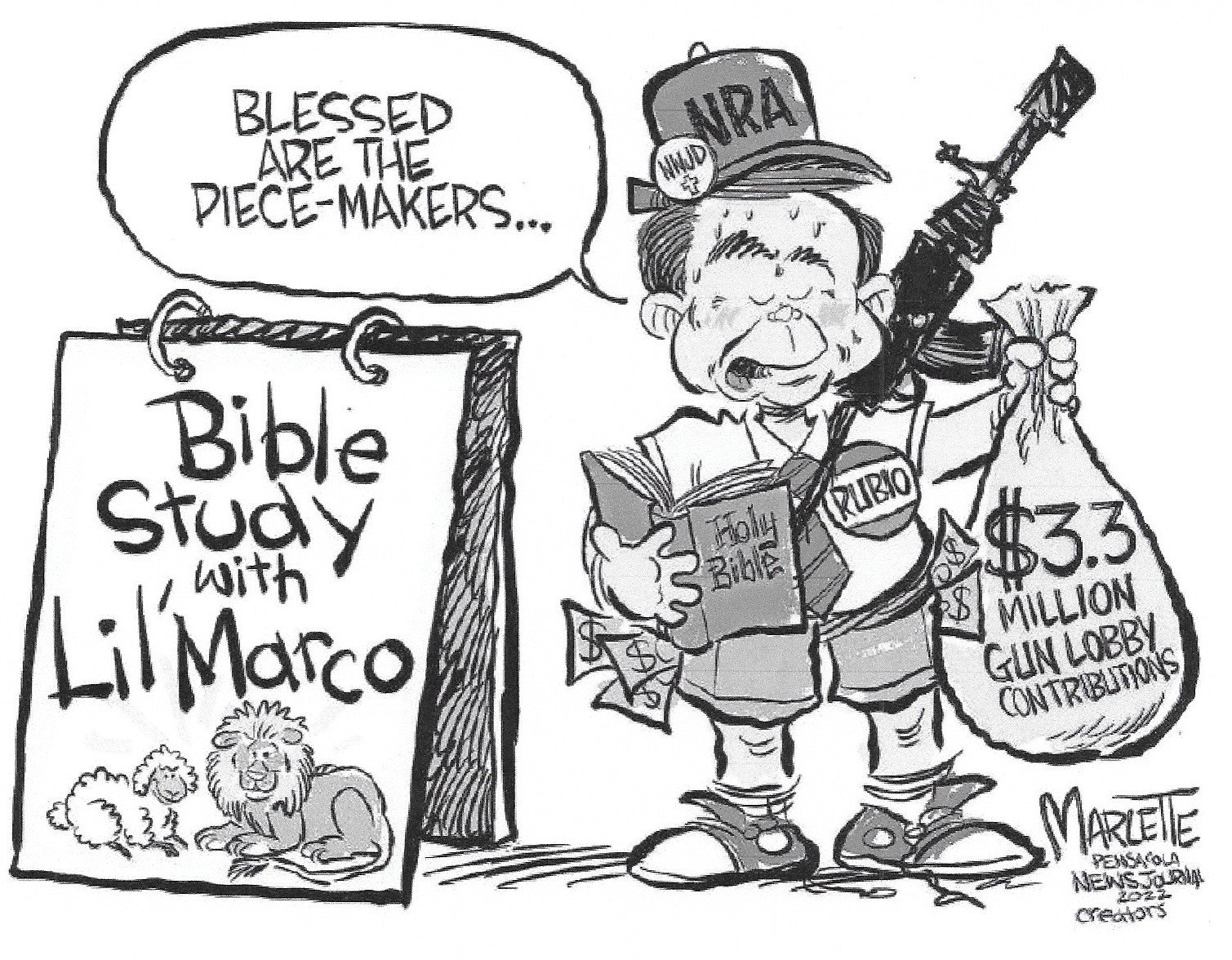 The Daily Commercial-Vicki Bush: Gun violence and the GOP

When using live ammo, my always-observant Vietnam vet drill sergeant, on those particular days, also was exceptionally nice. Because, having been in combat, he knew what an M16 or AR15 could do. An AR15’s unassuming small projectile can leave an exit wound the size of a baseball. It is designed to do horrific damage in remarkably rapid fashion.

The U.S. is the most heavily armed country in the world. We have more gun deaths than any other developed nation. U.S. gun deaths outnumber total U.S. war deaths. In the past 50 years there have been more gun deaths — 1.5 million — than in all the wars in U.S. history combined from 1775 to the present — 1.2 million. We are approximately 5% of the world’s population but have 43% of the world’s privately held firearms.

Schools, spiritual places of worship, supermarkets, outdoor music venues, nightclubs, movie theaters and hospitals; how long before any of these, and more, public places become inaccessible? How do we peaceably assemble without at least a modicum of fear? Is that a goal of GOP zealots?

How do we make a choice to remain civil when posterity, our future generations — already feared, resented and forsaken — are lost in the void of history? With cautious apprehension, do we sacrifice our own essential transformative experiences in yielding to the obstructionist wrongdoers in order to avoid uncivil disruptions in the hope of an interdependent, solution-driven, bipartisan relationship? And, if so, when facing frustration and outrage from repetitive intolerable hate crimes forged in deceit, greed and white backlash, which is worse, losing our free will from constraint or keeping it?

Each day we face a public health crisis from gun violence where fear, pain and suffering are becoming an acceptable foreseeable future. We know the extent of American gun owners’ rights, but when will the public have the right to be safe from the ever-rising number of gun deaths? Every year 100,000 Americans are shot and 40,000 die from guns. We average 24,000 gun suicides and 19,000 gun homicides. The numbers behind these deaths are preventable.

Just as any living individual affects the community, so too does any individual death or disability. Working toward solutions and policies that empower America’s well being — our right to protection, safety and posterity for future generational lineage — is self-evident. Accepting gun violence’s inevitability is learned helplessness. Fearing people’s power in protest, Republican Party actions show just how far they will go to stop a progressive majority.

As the party of cult seeking minority power continues to use aggressive, boastful assumptions of doublespeak — language usage that deliberately distorts or disguises the version of words to infer that something seems better, even if you instinctively know it to be — and it is — bad or wrong. Recall any podium sign, or actually the whole process, of a Gov. Ron DeSantis press conference — that’s doublespeak; a carefully crafted attack to stifle the truth and block progress.

Today’s radical GOP, in violation of allegiance and oath, has left the country reeling from a convulsive tempest of seditious ill will and deep-seeded subversive treachery. This political right-wing extremist party of obstruction confuses the mind and obscures the genuine true being of our constitutional democracy. Scornfully shredding norms, boundaries and safety barriers of truth and accountability, they lawlessly sanction fear and white resentment.

Under the guise of liberty, this unholy alliance of deceit and terror, having given themselves license to unlimited power of clear and extremely present danger, lay siege to the sanctity of our republic. Bunkered off from reality, a hornets’ nest of corrupt intent flush with dark money, a political party that views America through a futuristic lens of fear and paranoia, and look closely; these are the adults in power who are deciding your children’s fate. These threatening locked-and-loaded partisan politics are destroying our nation’s structural constitutional framework — and our families.

Instead of Americans pursuing happiness for the common good, we are losing our freedom and confidence to accommodate an agenda of gun proliferation violence from a radical subculture. This minority party holds the victim, rather than the perpetrator, responsible for limiting their purpose-driven violence. And, rather than expect that society will protect our rights and freedoms, we are the ones who must rearrange our lives to avoid assault.

We are protecting a standard of inappropriateness for which the gun has become rationalized as a glorified sacrament. But where there is lawlessness, there is no freedom. Society, by definition, sets parameters — limits or boundaries — for the larger good. The Constitution is an evolving American declaration of independence. The Second Amendment is not sacrosanct. It is the lives lost from gun violence that are sacred. And, it is politics that stands in the way of common sense gun regulation.