ROM THE LEFT- The Daily Commercial: The eye-opening reality of white privilege in US 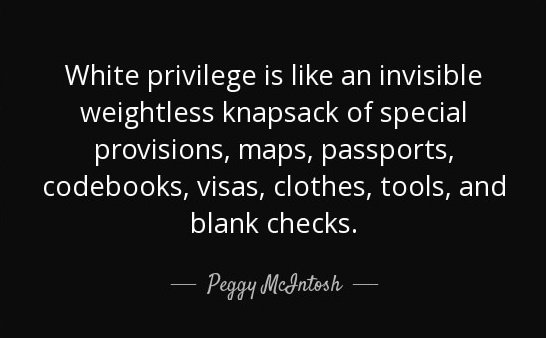 The eye-opening reality of white privilege in US

Over the past few months, America has renewed its focus on racism and racial equality in areas of social, educational, economic, health and social justice reform prompted by the death of George Floyd and others motivating whites and people of color to engage in meaningful, honest and actionable dialogue.

A seminal part of this dialogue is understanding the reality of white privilege and its impact on people of color. Webster defines privilege as “a right, advantage, favor or immunity specially granted to an individual or group and withheld from certain others.” This is not a 20st century phenomenon, nor a pity party hosted by people of color, but has been at the core of systemic racism beginning with slavery in America.

While many white Americans feel that they don’t fit into this category because they weren’t born into or inherited wealth and argue, rightly so, that they worked hard to acquire and maintain a comfortable lifestyle for themselves and their families. What they fail to understand is that the system was built to give them the access to power and wealth that was denied people of color.

This privilege is so inculcated into the lives of white Americans that it becomes their norm as the lack of privilege becomes the norm for people of color. These privileges can be viewed as either subtle or overt depending on the circumstances. In a social environment, whites feel free to move into any area that they can afford to live knowing that they will be accepted while people of color need to research the community to see if it is “safe” for them to live. When going into a store, often times the salesperson will hover, remain close or sometimes even follow a customer of color. When participating in a meeting, where there is only one person of color, their input is often overlooked or never asked for.

The disparity in education occurs in situations where the expectations of children of color are lower than their white counterparts. The system is more apt to label children of color as trouble makers or having behavioral problems These children seldom see themselves in textbooks highlighting the accomplishments/ contributions that people of color have made to this country and the world.

COVID-19 has brought to the forefront the inequality of health care between white Americans and people of color. Enablers of the high incidence of COVID-19 cases in communities of color are factors such as the lack of access to affordable health care, cramped living conditions, inability to work from home and dependence on public transportation.

White Americans are more likely to be extended loans than people of color. A practice called “redlining,” where banks and other lending institutions mapped out areas with a large number of communities of color, and drew a red line around those areas identifying them as high-risk loans. As a result, people living in those areas who applied for loans were rejected.

Although this practice has been prohibited by the passage of the 1968 Fair Housing Act and the 1967 Community Reinvestment Act, discrimination in some banks continues through different forms.

Post George Floyd protests have led to police reform including outlawing an officer’s use of chokeholds as well as other forms of police violence. However, we see the rate of incarceration much higher for people of color than for whites.

When asked, whites will more than likely tell you that they don’t know of anyone in jail with a much different answer from a person of color.

We hope that as whites and people of color continue to come together to acknowledge the existence of white privilege and its impact that we will work towards the day when all Americans are privileged.