Opinion-The Daily Commercial: We are a divided people, but some seem to want more division Mary Ellen Griffith Guest Columnist 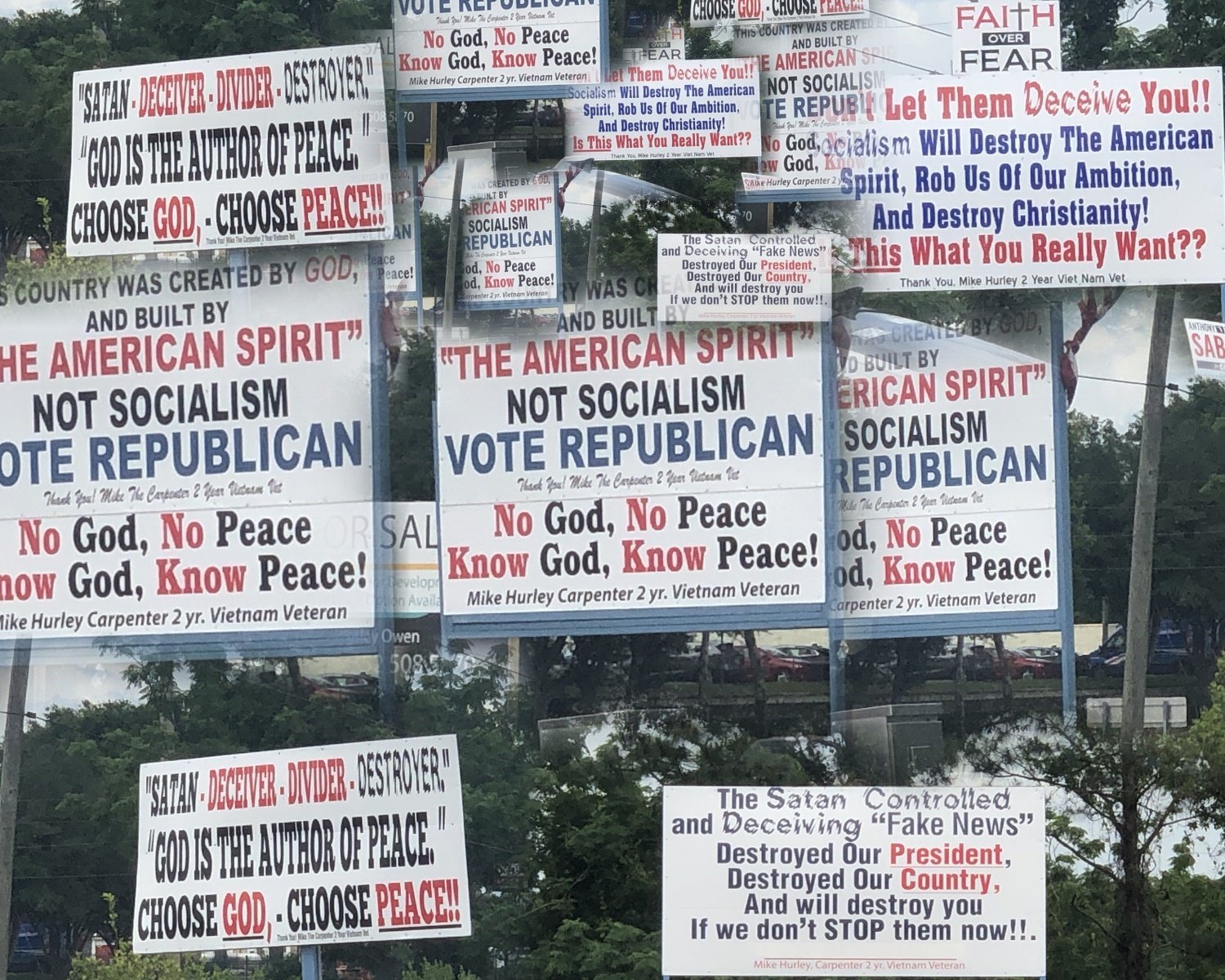 Opinion Column-The Daily Commercial: We are a divided people, but some seem to want more division

Head east on 441 around David Walker Drive and you’ll notice a few signs posted by a guy named Mike Hurley. Yeah, they’re still there. And he puts his name on them for all to see.

Signs filled with the same tired, old conspiracy theories: “Socialism” is obliterating the “American spirit” and eradicating “Christianity.” Signs that embrace the usual propaganda: “Satan controlled fake news … destroyed our country, destroyed our president, and will destroy you.”

I would feel sorry for the incredibly misled veteran if his hypocrisy wasn’t part of a crowd attempting to divide my country in two.

Hurley is representative of those who wave the union flag but spout divisive rhetoric; individuals who are an embarrassment to true Christians and should be charged with attempted murder of the American spirit. They have chased us out of our churches with their political bullying and attempted to divide us with ridiculous buffoonery. They have used the flag to invoke violence as opposed to the unity it was meant to represent.

I find it hard to believe these conspiracy mongers have read the Bible or the Constitution. Surely, they skipped the red letters in the Good Book and the black letters in the first 10 Amendments — except the Second. Anyway, if you must tell me you are a patriot or a Christian, but you publicly make false accusations of socialism and shake your hellfire and brimstone fingers at your neighbors, well, I highly doubt your patriotism or your piety.

I am guessing that Hurley’s claim of “destroyed our president” is yet another played-out reference to a stolen election. Admittedly, I was a little surprised that Joe Biden won the Democratic primary, but the truth that Hurley and friends seem to ignore is that those of us who voted for Biden did not do so in a cry for socialism. We would have voted for Kermit over Donald Trump. And it was not about his bizarre, all-hours-of-the-night, often inappropriate tweets.

It was not that we thought Biden would save the middle class — although we were hoping for some improvement. We simply know Trump is a phony who spent our tax money on making the rich richer, and we do not want a guy who seems a step short of a full flight of stairs with his finger on the proverbial button. But more importantly, it’s our constitutional right to vote for whom we choose, just like every United States citizen, no matter their affiliation.

It only pains me that it took a Republican to tell the voter fraud propagandists of Lake County to “put up or shut up.” Supervisor of Elections Alan Hays complained that “Leaders of the local Republican Executive Committee have made blatantly false statements about the 2020 election in Lake County, but not one person has offered the first bit of evidence nor has anyone given me any names of alleged violators of our election laws. It is time for those who are making the accusations to either put up or shut up”

With that made clear, there were two Sumter County men who admitted to cheating in the 2020 election. Just last month Charles F. Barnes and Jay Ketcik, of The Villages in Sumter County, pleaded guilty to voter fraud. And, guess what? They were Trump supporters. In fact, after some research, the only individuals I could find who committed voter fraud throughout Florida were Republicans. So, where are all the Democrats stealing elections? So much for Hurley’s “destroyed our president” sign. Our president is in office.

Like the feuding Jefferson and Adams factions during the infancy of our nation, we are a divided people. And, like them, there will always be disparity. But, where would we be without the contributions of both Adams and Jefferson? That is why the checks and balances our forefathers put in place made this nation strong. So, we need to progress beyond the Hurleys of this republic and get to the business of reinvigorating our union.

So, Mr. Hurley, take down those signs.