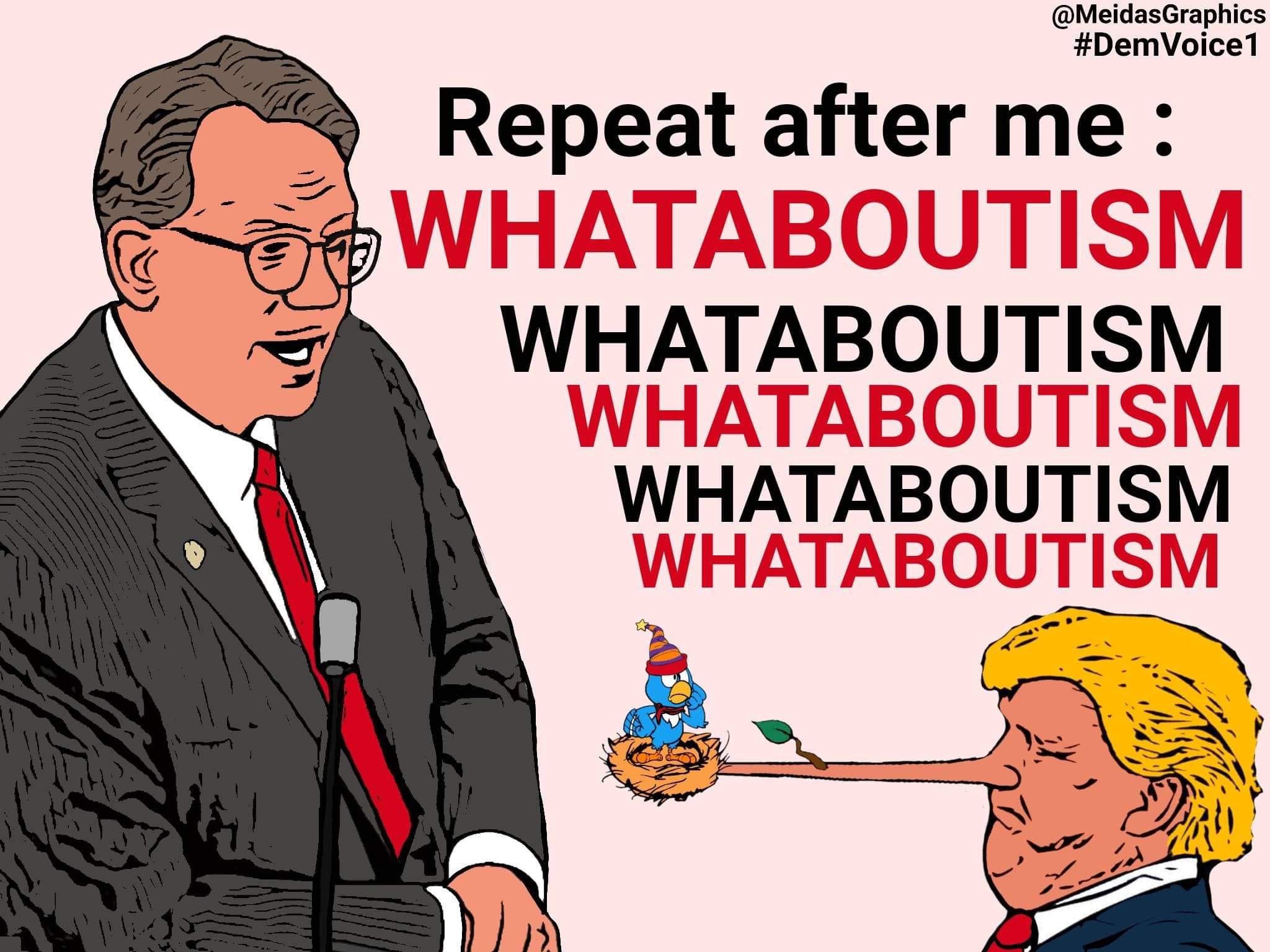 “Whataboutism” is a rhetorical device that involves accusing others of offenses as a way of deflecting attention from one’s own deeds, according to the Merriam-Webster dictionary.

Kids are experts at this, and so are many of the GOP. The anti-facemask group, who fought mandates as their right to choose, used whataboutism to compare their protest to pro-choice abortion rights. This flawed logic only works if pregnancy is a contagious, deadly virus spread by fluids coming from your nose or mouth. Wearing a facemask should have been a matter of public health, not a political issue, and women have the right to choose abortion.

With the Jan. 6 Commission hearings being televised, a lot of whataboutism is going on. During a TV interview, GOP Florida U.S. Rep. Bryon Donalds was asked if the attack on the Capitol was an insurrection; instead, Donalds described it as criminal trespass. Then, he said he wanted to know why Speaker Nancy Pelosi isn’t being investigated because she didn’t order the National Guard to the Capitol while Trump ordered the National Guard to D.C. days before the attack. Three-hundred-forty National Guard members were in the District on Jan. 6, but they were in charge of traffic control and Metro crowd control. Pelosi has no authority over the National Guard and, during the attempted coup, she and Sen. Schumer called for military help; Trump never did.

A major GOP redirection attempt began Jan 6 when people were told it was really Antifa protesters wearing Trump clothes and waving his flags who stormed the Capitol. Why would they have wanted to stop the transfer of power to their elected president, Joseph R. Biden?

Republicans are complaining about insurrectionists being treated harshly by the Justice Department because of their political views, asking, “What about the leniency toward those arrested when protests turned violent after George Floyd was murdered?” Racism comes into play, but property damage, charges of arson and looting were dealt with seriously.

According to the Associated Press, 120 defendants in the US either pleaded guilty or were convicted at trial of these crimes. Of those sentenced, 70 have gotten an average of 27 months in jail, and 10 have prison terms of five years or more, but those crimes don’t compare to breaking into the Capitol, impeding congressional proceedings to overturn an election and targeting federal elected officials for assassination.

Some who participated in Jan. 6 have only been charged with misdemeanor offenses. Everyone involved with the Jan. 6 coup must be held accountable, and elected officials who participated in any way must be removed from office because this was an act of sedition — an attempt to overthrow our democracy without judicial consequences — and they will try again.

The oil companies closed refineries and slowed production during the COVID-19 shutdown, which helped cause a shortage and increased gas prices, causing inflation. Rather than address the issue of oil companies making billions in profits while price gouging American consumers or stopping our government’s welfare to oil companies, the GOP would rather add to the wealth of the gas and oil industry with more leases of government land, offshore drilling rights and resurrecting the Keystone XL Pipeline.

They already have 13.9 million acres of unused public land leases, and Floridians have made it clear they oppose drilling off our coast. The Keystone XL was never going to produce gas for the US; this dirtiest of crude piped from Canada and refined in a tax-free zone in Texas was then contracted to be shipped to foreign countries.

Gun violence in the U.S. with the latest massacre of 19 children and two teachers in Uvalde, Texas, is the No. 1 cause of children’s and teens’ deaths. We have to start with federal gun control laws and stop the gun lobby gridlock or we will never stop these killings.

The GOP does “whatabout” anything but gun control — mental health, arming teachers with rifles, AR rifles needed to shoot varmints (raccoons, prairie dogs, etc.), violent video games, prayers in public schools and, of course, thoughts and prayers. The majority of Americans want gun control laws. Sen. Marco Rubio has taken more than $3.3 million from the gun lobby and opposes any gun regulations. Gov. DeSantis didn’t want to listen to a gun control activist after the Texas killings; his hope is to sign into law a bill allowing guns to be openly carried without a permit.

Vote for candidates who take personal responsibility, are not controlled by lobbyists and support gun control legislation — help save our children.

Today, fathers of the thousands of children in the US who have lost their lives to gun violence are not celebrating.