Jacobson: The differences in our two major political parties-Published in Daily Commercial May 14, 2017 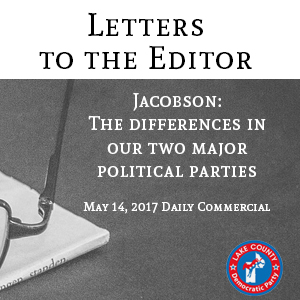 Food for thought from Jake Jacobsen.
There was an adage that there was not a dimes worth of difference in our two major political parties. It was never true and certainly not in today’s politicized nation. What has occurred is that the differences in the parties has become blurred to many voters, as evidenced by the fact a billionaire from a party with no history of helping the working class won a large percentage of their vote in 2016.
There are core beliefs that separate the two parties. The role that government plays has become the major issue separating the parties. Republicans believe as Ronald Reagan said, that government is not the solution to our problems, but is the problem. They believe the government should not interfere with our economy at all — the laissez faire principle where markets work best without government regulation. We tried that during the “Robber Barron Era” of the late 1800′s and during the “Roaring Twenties” with wealth moving to the top 1 percent.
For the rest of the article CLICK HERE.