FROM THE LEFT- The Daily Commercial: Will our children recover from this shameful period? 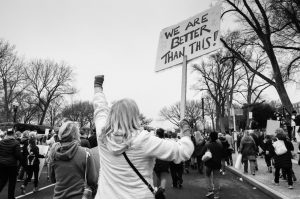 Will our children recover from this shameful period?
FROM THE LEFT
It is often said that one of the easiest things to forget is pain. You remember that you had it and that it was, well, painful, but you just can’t recall what it really felt like.
I think of that when people talk about the “good ole days.” They just don’t have a clear memory. They only recall the good parts. Like watching “I Love Lucy” on a tiny black and white TV, hula hoops and saddle shoes but not the racial tension and violence of the Montgomery, Alabama bus protest which sparked the Civil Rights Movement or the Korean War that claimed the lives of over 33,000 young American soldiers.
We are nostalgic for our beautiful cars of the ‘60s with glass-packed mufflers and supercharged engines, the dawn of color televisions, Martin Luther King’s famous “I have a dream” speech, Woodstock, the Beatles, Neil Armstrong stepping onto the surface of the moon but not for those dark days when our young President John F. Kennedy was assassinated and later his brother, Bobby, and Martin Luther King himself or the Cuban Missile Crisis or the escalating war in Vietnam.
We miss the disco music of the ‘70s, “Star Wars,” “Rocky,” the Frisbee, bell bottoms and the dawn of Apple Computers but not the massive protests to the Vietnam War or the fall of Saigon, the oil crisis or the dark days of Watergate.
We love to revisit the ‘80s, “ET,” the space shuttle, Michael Jackson, the end of the Cold War and the fall of the Berlin Wall but not the recession, the farm crisis, the Iran-Contra affair or the Chernobyl disaster.
The point is that the good old days were not all good, but we have numbed the pain. It is hard to know how our kids will remember this time in our history. Video games and massive leaps in technology to be sure but will they ever be able to forget the pain?
Watching the slow death of our democracy, every form of decency and even truth itself.
Our country is and always has been the greatest country on the face of the earth. A beacon of hope shining across the world.
I was truly insulted when Donald Trump convinced people that America was not great.
One of America’s greatest assets has always been the attitude that when faced with the impossible, we say: watch this. When asked to save the world, Americans have always answered the call, but when needed to save ourselves, we remain silent. We seem to be oblivious to this bizarre behavior of alienating our allies and embracing our enemies. Of building walls around our country and of holding children of immigrants in cages.
Of destroying long-held trade agreements with the rest of the world and instituting a total “go it alone” strategy.
All of a sudden we have changed. We seem to be a nation sitting on our hands, hopelessly witnessing what is left of our democracy spinning out of control. We seem to have lost our will to stand up and fight for our freedoms. Our very way of life is being chipped away as we sit glued to our TV screen, not transcended by the fall of our nation but by a video game.
We seem to be on an endless merry-go-round of scandals so perverse that no one seems to know quite what to do. It is like watching a horror movie that really scares you and makes you squirm in your seat but which you still can’t take your eyes off of.
And when our children finally look up from those shining screens they will gaze into a new reality where any trace of the greatness that our country once was has faded into memory.
This administration has forever stained our history and I believe that this shameful period is a pain that we will never be able to forget.