FROM THE LEFT-The Daily Commercial: Why do black votes matter? 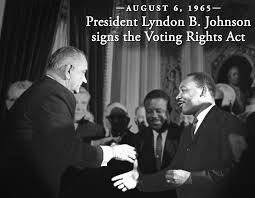 THE LEFT
Why do black votes matter?
By Patricia Jackson
The answer to this question is that blacks have the power to make lasting change in the Nov 6 general election. In order for us to understand how we can make change and envision where we could go, it is important for us to understand our voting history.
The Voting Rights Act of 1965 gave blacks the power to exercise their right to vote as guaranteed under the 15th Amendment of the United States Constitution.
Yet, in spite of this, some blacks refuse to or express no interest in voting. Factors such as distrust, fear, misinformation, apathy and the feeling that their one vote won’t make a difference contributes to this problem.
Regardless of their reasons, blacks have too much at stake to not vote on Nov 6. Racism continues to be on the rise, due, in part, to the current political environment which has emboldened racist behaviors, viewpoints and a lack of respect for women. The number of hate crimes in the United States rose by 5 percent for the second straight year in 2016, according to the FBI. While little has changed in the number of killings of blacks by police, one life taken for the wrong reason is too many.
Some of the most recent incidents of racial bias occurred when one California white woman threatened to call the police on an 8-year-old black girl for selling water, another white woman who called the police on a black man she saw babysitting two white children at a Georgia Walmart, another from a different white woman in St. Louis who tried to prevent a black man from entering the luxury apartment building where he lived and the list goes on. All of these incidents have a common thread running through them; they happened simply because they were existing while black.
The most effective way for blacks to work toward ending this downward spiral is to let their voices be heard at the polls. This year there is a chance to make history by voting on ballot measures, as well as candidates. An issue of paramount importance to blacks and the marginalized community is that of the Restoration of Voting Rights for ex-felons which appears as Amendment 4 on the General Election ballot.
The power of black votes was evidenced in wins for the Democratic nomination of governors in three states — Andrew Gillum in Florida, who, if elected, would serve as the state’s first black governor, Ben Jealous in Maryland and Stacey Abrams in Georgia. Voters have elected just two black governors in U.S. history, Deval Laurdine Patrick who served as governor of Massachusetts from 2007 to 2015 and Lawrence Douglas Wilder, who served from as governor of Virginia from 1990-1994.
Will the election of blacks into political office end racism or ensure that all of the issues impacting people of color will be resolved? No, but what their election will do is give blacks a voice at the table to address those issues that negatively impact the black community and effectively merge those ideas with issues that touch the lives of all constituents such as affordable health care, raising the minimum wage, reducing the prison population, environmental protection and common-sense gun laws.
So, why do black votes matter? The candidates that we elect will affect our current lives, but, more importantly, future generations. We may never pass this way again, so let’s make this moment count.
Go vote!
Patricia Jackson