From the Left-The Daily Commercial: Who knew? The trajectory of Trump’s incitement to violence John Heimburg, Columnist 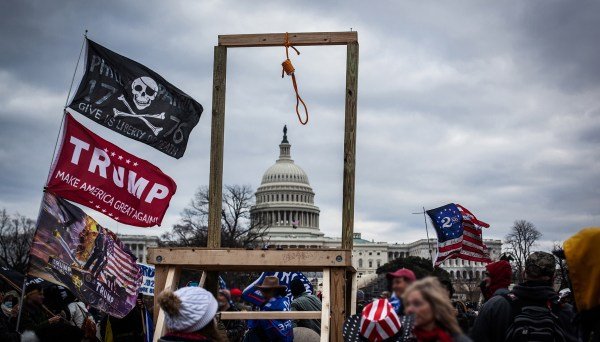 From the Left-The Daily Commercial: Who knew? The trajectory of Trump’s incitement to violence

In the Republican primary campaign, he focused on eviscerating opponents with ugly characterizations, while policy issues were relegated to slogans like “Build the Wall.” His style attracted increasing numbers of violent admirers to his rallies, where he directed them and security staff to rough up protesters: “Go ahead, knock the hell out of ‘em. I’ll pay your legal bills.”

At the 2016 Republican Convention, Trump winked as he said “I know what’s wrong with the system,” and peddled his strong man solution: “Only I can fix it.”

His general election campaign, like the primary, centered on destroying his opponent “Crooked Hillary”. At his rallies, he encouraged the crowd’s baser instincts with chants of “lock her up”. He teasingly asked the Russians for illegal help finding her lost emails. They obliged.

Trump’s inaugural speech focused on American carnage, which, he stated, “will stop right here and stop right now.” No plan for ending it other than his image as a strong leader. The importance he placed on this image was evident in his first press briefings, which focused almost exclusively on the huge record-setting attendance at his inauguration (it wasn’t).

Early in his administration, the visibility of white supremist and Nazi groups increased dramatically. The violence and death at Charlottesville were met with a pro-forma scolding, then a wink of acceptance: “very good people on both sides.” Families seeking asylum at the border were incarcerated and children separated from their parents. As incidents of police and right-wing violence became more visible, Justice Department investigations of official misconduct decreased to nearly zero.

As the 2020 election began, Trump said he would only accept the results if he won. His policy for the growing protests over police killings was for police at every level to dominate the streets by force. By the time of their convention, the Republican platform had become “whatever Trump wants to do.”

In the presidential debate, when asked to denounce the Proud Boys, he told them to “stand back, and stand by”. The campaign then recruited and trained an “army” of volunteers to watch polls in key swing states.

In the early morning after election, as votes were still being counted, Trump declared victory. His “stolen election” campaign took legal actions laced with Q-Anon and other election fraud theories. As these were failing in the courts, his heavily armed supporters attempted to intimidate state officials as they conducted recounts and audits. Trump then tried to coerce election officials and the vice president into overturning the election. They refused.

At some point, Pentagon leaders felt the need to state that presidential use of military force is not appropriate in election disputes.

On Jan. 6, as Congress met to certify the electoral vote, Trump invited his followers, many of whom had just shown off their military equipment and training in the “Million MAGA March” on Washington DC, to meet on the ellipse for a “wild time.” In an impassioned speech, he accused Democrats of vile crimes in stealing the election and “our country”, and directed the aroused crowd toward the Capitol. Minutes after the doors and windows were smashed in, he tweeted “Mike Pence didn’t have the courage to do what should have been done to protect our Country”.

All the above has been extensively documented.

So now we’re left wondering, how did all these heavily equipped folks decide to forcibly break into the Capitol to stop Congress from declaring Joe Biden president? I mean, whose idea was that? And the makeshift gallows set up outside? Or hundreds of people searching around for Democrats, some with plastic handcuffs? Or the rising chant “Hang Mike Pence! Hang Mike Pence!”?

Really? No one could figure out how this could have happened? Are we sure this wasn’t just another peaceful group of sightseers touring the Capitol? Hindsight is just so 2020.