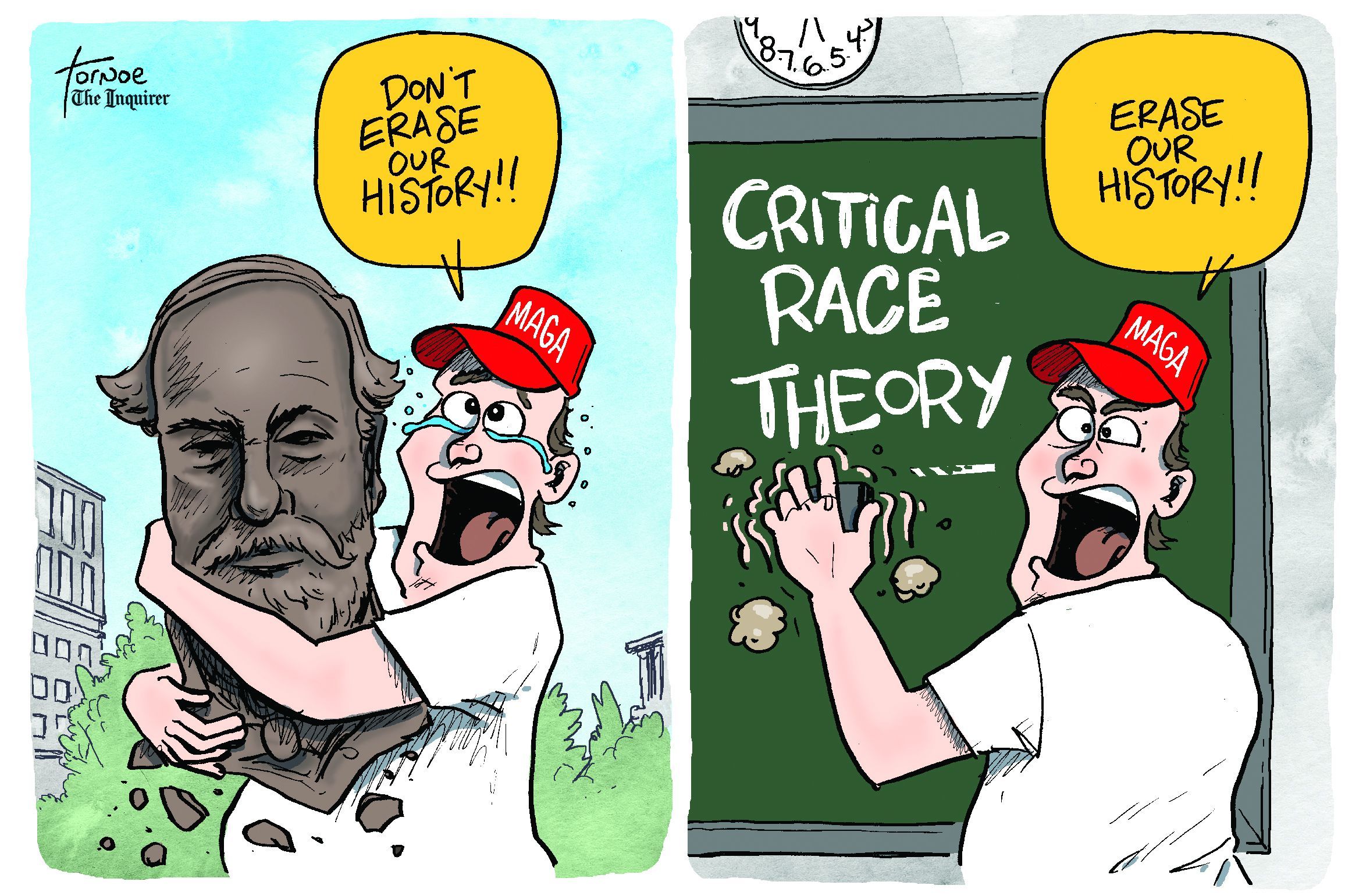 From the Left-The Daily Commercial: White supremacy, anti-democracy and the history of preempting progress

Searching through archives of ancestral hometown newspapers in an attempt to scrap together a lifetime’s worth of photo journaling, one thing became certain, reinforced racism has woven itself through every fiber of America’s history.

Rooted in early 19th Century state laws, not long after Revolutionary War independence, privileged white testimony was used to invalidate people of color. Non-white community members’ voices were canceled out in order to suppress any rise to a level of prestige or power.

Looking back over the decades since many of those stern-faced, sepia-tinted family photos were taken, it is more than unfortunate that bigotry, prejudice and segregation have remained locked in time. Times when ghosted eyes peered out through shrouded hoods of the purist white and crusading vigilante vindication lay bare its contempt for democracy.

Out of the ashes of burned crosses, a white-heat urgency of hate and violence targeted Black families and whole African-American communities in an attempt to erase the history of Black people.

But, as Americans, the proud moments — and the moments of fear, shock and suffering — allow us all to be a part of the awareness and understanding of the full national historical experience; Black, native and immigrant.

Although today’s holier-than-thou tribal clan factions ditch the white shroud for a proper suit, proudly sporting a particular political party’s lapel pin, they continue their vicious verbal strategy of phantom political theatre. A strategy where, behind the scenes, white supremacist backlash mentality targets the mark and works the lie.

Willing the grapes of wrath come to another harvest, historically embedded patterns of ingrained entrenchment against self-determination of equal rights and opportunities have continued to sow the seeds of white supremacist grievance and bully influence. Seeds of hate, lies and cynicism, meticulously planted deep within centuries-old fertile, furrowed ground in the expectation of reaping immutable absolute power.

In the aftermath of the Civil War, those whose eyes had seen the glory hoped to unify and integrate the states through the Reconstruction Act of 1867; all while under federal military rule to ratify the 14th and 15th Amendments to the Constitution for the protection of recently emancipated slaves and their right to vote.

In 1877, when federal troop military service ended, ex-Confederate states legislated fraud and intimidation by issuing into law poll taxes and literacy tests, an anti-democratic move to keep the adult Black male population from voting or taking part in any political activity. Stuck in low-wage jobs with no ladder to advancement, and Confederate slave states having made it illegal to teach slaves to read, set the stage for freed slaves’ failure.

A chasm of profound societal and economic changes shifted authoritarian southern state ruling-class movements in business, social, political and religion into dominant overdrive. Even having confirmed that the public good was an obstacle to their authority and acquisition interests, these so-called community leaders of integrity and morality advanced the contemptible myth known as The Lost Cause.

Fabricating emotionally charged nostalgic Confederacy sentiment allowed for a pervading bitter, revenge-driven point of view. A growing fervor resonating out-and-out hate for “the other” and any chance at reunification. And, to this day, that vacant-eyed specter of fear and heavy handed xenophobic control has continued to preempt progress.

Curiously, a similar historical defeat using a false conviction of loss took place some 50 years after the end of the Civil War. After the Armistice was signed, ending World War I, a soon-to-become dictator manufactured a big lie to appease the German people for their defeat; many believe this big lie led to World War II.

Psychological manipulation creates hysteria and questions the validity of facts and a person’s own thoughts by perpetuating callously cruel campaigns of specific objectives bundled up in the deceptive rhetoric of performance neutrality and choice. Like upending the word “liberty” by basing it on a false premise. Case in point, culture-war battles about critical race theory, a decades-old law school conceptions discussion topic about institutionalized racism.

We’ve all been witness to school board meetings where foolhardy, fake-turmoil blaring blow-horn suppression tactics of trash-talking threats from ill-judged, fly-by-the-seat-of-one’s-pants, self-styled happy warriors try to silence democracy. Unfortunately, this divide-and-conquer strategy is still standard operating procedure for many Americans.

Social conservatism dishonestly presents itself by applying flowery language, like individual freedom and fairness without favoritism, all while erasing science and fact-based history from student and public view. These blatant, culturally offensive bills, under the guise of “parental choice,” preempt progress.

The need to defend a first principle forward move along a delusional white supremacist scrimmage line shows outright how our constitutional fundamental foundational elements of true liberty, opportunity and social justice have been, and continue to be, preempted from forward progress.

Promoting long, disgruntled narratives of deep-seated resentment disallows the public mind not to be prepared to receive the truth. Propping up a causal big lie allows history to be seen only from a certain factious advantage, leading to deniability of truth.

Our trailblazer ancestors, many of whom lived under human bondage and through the dark terrors of authoritarian regimes, became beacons of true liberty and equality. They did not fall to their fears, but instead rose up to be generational advocate apostles for democracy.

They remind us of who we are at our best. And that democracy is something worth fighting and dying for. They paved the way for future generations to wholly understand the iconic words of a former slave who became a prominent activist, author and public speaker, Frederick Douglass, who said, “Whatever may be tolerated in monarchical and despotic governments, no republic is safe that tolerates a privileged class, or denies to any of its citizens equal rights and equal means to maintain them.”