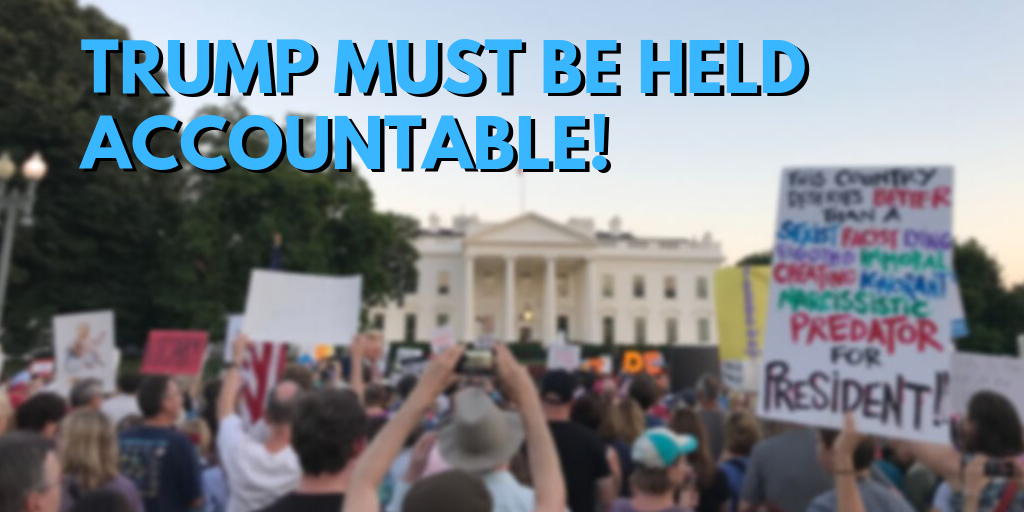 President Donald Trump, his administration and the Republican Party must be held accountable for their unlawful actions during his presidency.

While Trump is still trying to throw out the legal votes for President-elect Joe Biden and Vice President- elect Kamala Harris, social media is working on rehabilitating (whitewashing) Trump’s image by recommending the COVID-19 vaccine be named after him. These same people find no fault in Trump’s policies, it’s just the Democratic Party who has picked on the poor guy during his chaotic four years in office.

Let’s do a year end review of some of Trump’s policies.

They include attacking immigrants from Mexico as rapists and murders, discriminatory travel ban of persons from predominately Muslim religion countries, labeling them terrorists. These were Trump’s opening salvo for discrimination which has lead to an increase of domestic terrorism by White Nationalist and neo-Nazi hate groups.

Trump asked foreign governments to interfere in both the 2016 and 2020 elections.

His immigration policies took children and babies from their families on our southern border as an illegal deterrent to keep families from seeking asylum in the United States.

Trump’s lack of transparency includes refusing to release his tax returns, disclose loans or income received from foreign governments before and during his presidency.

Trump’s impeachment was for cause: abuse of power and obstruction. He did blackmail President Zelensky of the Ukraine in hopes of defeating Biden in the 2020 election with false accusations concerning Hunter Biden. Sen. Mitch McConnell and the Republican Party made a mockery out of Trump’s impeachment trial.

The most egregious action by Trump was dismantling the White House pandemic task force and ignoring information for how to deal with a pandemic. His administration with full knowledge of how deadly COVID-19 was, decided to make it a political issue. Trump downplayed the virus, belittled wearing face masks, chose not to use the power of the federal government to produce protective medical equipment or national testing. This decision was made with the intention that Democratic lead states with larger urban populations and people of color would suffer the most from the virus while Republican lead states and rural areas would not be as affected. This callous disregard for human life has resulted in our country leading the world with a death toll of over 340,000 people.

Trump’s use of voter suppression tactics during a pandemic in the 2020 election: doing his best to dismantle the post office to make processing the delivery of vote by mail ballots more difficult while suing states who tried to make voting by mail easier so people didn’t have to risk their lives going to the polls.

Trump removed the cyber security team from the White House in 2018. Now we’ve learned Russia has been hacking the U.S. government and prominent companies’ systems for over nine months, obtaining vital classified/confidential information.

Trump acts like a tin-pot dictator, calling the press “the enemy of the people,” illegally using federal officers to attack peaceful protestors and attempting to use his stacked Supreme Court to overthrow the 2020 election in his favor. Handing out “get out of jail free” pardons to murderers, corrupt GOP politicians and convicted felons from his campaign and administration. He encouraged the hate group Proud Boys to use violent street protests and threatening to use martial law to illegally remain in office.

We need accountability for Trump’s daughter and son-in-law working in the White House, Cabinet members and department heads hired for political reasons not their knowledge or competence, who used personal email accounts for government business and used their positions in our government for their own self interests and monetary gain.

Without Trump, his administration and the GOP facing accountability, there will be no course correction for the Republican Party. Some Republicans are now making plans to block the required congressional approval of the Electoral College election results.

To save our democracy from future corrupt administrations our country must seek accountability and justice with investigations, trials and punishment, no pardons.

Had the 2020 election not been won with 81 million popular votes and 306 Electoral College votes for the Democratic president, our democracy may not have held. The checks and balances of government often fail in favor of power and greed.