FROM THE LEFT-The Daily Commercial: We are a country of immigrants 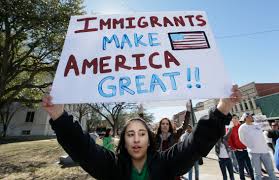 FROM THE LEFT
We are a country of immigrants
Now that the 2018 midterms are over and we’ve started galloping towards the 2020 Presidential primaries, perhaps we should take a moment to catch our collective breath and decide just what kind of country we would like to be.
Do we want to fundamentally change what the United States stands for or do we want to continue the grand experiment in democracy that is our great country? Do we want to continue as a beacon of hope to the entire world or do we want to spread barbed wire across our borders?
It’s difficult to do both.
Fear of strangers invading our country has worked well for some of our politicians. Anti-immigration and hatred have become the mantra of the right, seemingly oblivious to the fact that most of them are of immigrant ancestry. The president stokes the fear that he himself has created by sending our troops to the border to answer a threat that does not exist — a gross misuse of our military for political reasons.
Unfortunately, this boogie man theory works well on the uninformed. The truly amazing thing is that our troops were sent to guard the border of the politically fertile states of Texas and Arizona instead of the true point of entry that the caravan was headed toward in California — the Tijuana/ San Ysidro border crossing.
The election is over and the “threat” has mysteriously dissipated. The troops are packing for home and this $220 million political stunt has been all but forgotten by the news — even though the bulk of our “invaders” are encamped in Tijuana waiting to approach the border and apply for asylum.
The numbers left in the caravan are far from the original 7,000 often quoted in the news but closer to 2,000 — making the expense of this project close to $110,000 per man, woman and child in the caravan.
If you want to be afraid of something, it should be how the politicians are misusing our tax dollars.
Politics has become so nasty in this country that it sometimes turns a feel-good holiday like Thanksgiving into a battleground at the dining room table. Having just come through Thanksgiving, it should also be remembered that it was immigrants that sat down at the table for that first historic feast.
I used to attend a patriotic show at Busch Gardens with a video flashing scenes of our great country as they played the song ”This Land Is My Land” — it made me cry every time. Our beautiful country is so blessed with riches and opportunity that those of us so fortunate to stand upon her soil should cherish our good fortune. And, lest we forget, one of the founders of Anheuser Busch, who produced the film, arrived in St. Louis as part of a large group of German immigrants seeking political asylum with little more than a beer recipe in his pocket.
This country has done extraordinary things and has become the greatest country on the face of the earth — largely due to our immigrants. Immigration is the bedrock on which our country is built. We are strengthened by the struggles endured in other countries that made our fathers and grandfathers seek out a new land. They knew how to shape our country because of those struggles. Different cultures meshed together to make up the fabric of our country.
So what potentially famous child is that knocking at our door? A future leader, an actor, musician, scientist, doctor or even a beer entrepreneur? Should we fear them? We should not be asking how much money they have on them as they step onto our soil. We should ask what dreams they have and the content of their heart. As they seek political asylum and run to the door of our country for help, we should be saying “Come in. What can you do to make our country even better?”