FROM THE LEFT-The Daily Commercial: Trump’s tactics undermine our democracy 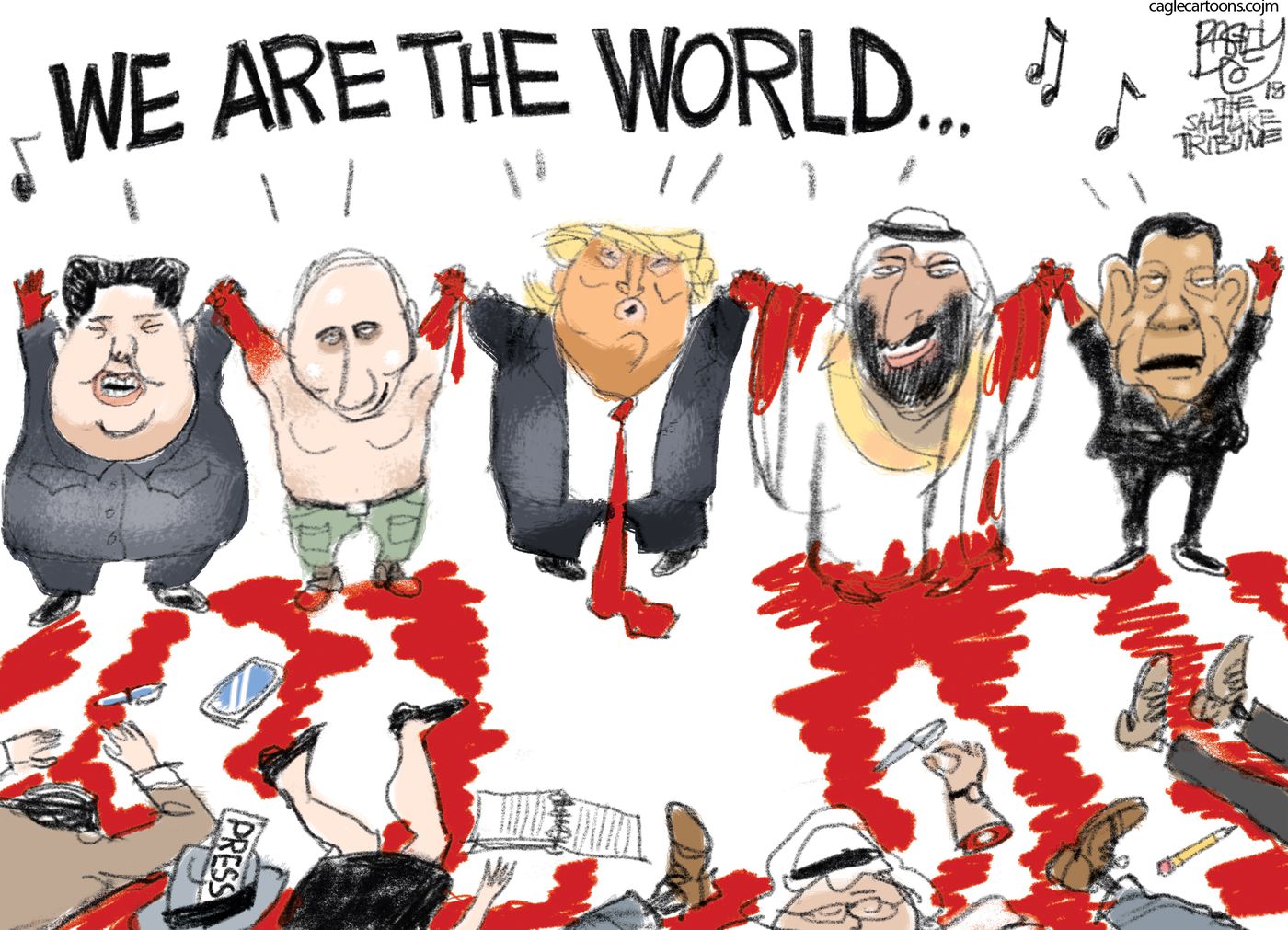 El Presidente, Donald Trump, is trying to turn our democracy into a Banana Republic. Collectively, knowledgeable Americans are saying: “This is another fine mess you’ve gotten us into.”

We know how an autocrat spins his or her authority: Call the legitimate media enemies of the people; cultivate ‘state news’ outlets replete with talking heads that never speak ill of you and who see no evil, speak no evil and hear no evil of the evil things you do; create your own truth and deny facts; silence your critics by intimidation, bullying, firing, reassigning and discrediting them. Expose and attack those who blow the whistle on your behavior, morals, character, illegalities, incompetency and intellect. Threaten to lock up any opposition, encourage supporters to plead the Fifth when caught, pardon those who support you despite knowledge that you are a charlatan. And lie.

Throw your admiration and support to other authoritarian regimes and impugn your country’s allies.

Host numerous rallies to bask in admiration of your loyal followers and slander any one in opposition. If you have family members who have the skinny on you, besmirch them as swiftly and as thoroughly as you can. Change your closest confidants in the palace, er, White House, as often as possible so that constant chaos ensues. Make sure no one brings anything to your attention that will upset your day, or show you in a bad light. And lie.

Disparage those who served in the military, like the late American POW hero, John McCain, who are opposed to you. Make the military you tried to avoid, your play thing. Sic the military on citizens who protest you or your oppression regime.

Assert ‘law and order’ only to quell dissent while at the same time preventing prosecutors from prosecuting you.

Declare yourself to be above the law, and with Attorney General William Barr’s cooperation, the only citizen who is above the law and convince the judicial system, irrespective of Constitutional law, to agree with you. Convince those who are misinformed that as president, despite your spending a year of your presidency golfing that you are too busy to be hauled into court. Did I mention, lie?

Keep your finances secret from the minions who adore you and also those who distrust you, while you plunder the nation’s treasury. Sabotage health care and the environment. And lie.

Make up stuff no matter how significant or insignificant so that all will know you are omniscient and omnipotent. If you don’t like the path of a hurricane, make up your own path and display it. Practice medicine without a medical degree because you know more about medical ‘thingies’ than do those who are so educated.

When your partner sin- crime go to court and are found guilty as charged, simply commute their sentences or grant them a presidential pardon. This surly encourages wrong doing by other admires of your autocracy.

Despite video evidence, his own governby- tweet, tweets and the testimony of his own appointees and the corroborated reporting by many book authors and major media reporters, nothing Trump has unbelievably done shames the guy. Informed people know it: this president has gotten away with more corruption and stupidity than any president in modern history.

If a criminal can fire the detectives, whistleblowers and prosecutors investigating his crimes, his name must be Donald J. Trump, or the aliases he used to cover his tracks: John Barron or David Dennison.

Trump, bless his heart, has employed all of these tactics. And more. Face it, he is as dirty as the visiting baseball teams dugout! Unfortunately, El Presidente Trump is what you get when you combine Dick Tracy with Mr. Potato Head: a dictator wannabe idiot.