FROM THE LEFT-The Daily Commercial: ‘Tis not too late to seek a newer world By Vicki Bush guest columnist 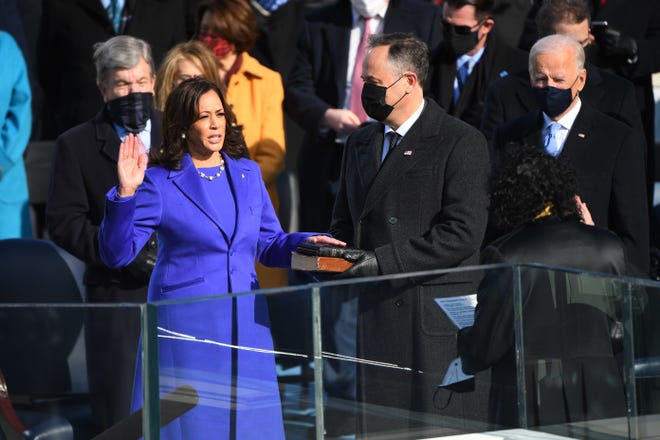 ‘Tis not too late to seek a newer world

The relevance of consequences for wrongful behavior and the significance of lessons learned has remained an integral component of American citizenship. Respecting the political will of the majority while protecting the constitutional rights of the minority, although difficult to envision in a new nation has, nearly two- and one-half centuries hence, been stretched to its breaking point.

The foundational cornerstone of our republic and democratic system of government was shaken to its core by conspiratorial narrative and false premise — an endless spiraling descent into deep seeded hate, death, and mayhem surrounded by methodical disinformation, willful cruelty, corruption, and cover-ups. Left emotionally spent and physically vulnerable by this morally bankrupt former administration; tyranny came knocking at our door. This was the 45th administration of the United States of America under Donald J. Trump.

The Big Lie, atop a multitude of very serious lies, allowed a far-right Republican Party “skin in the game.” Enveloped in a war on reality, their universe of altruistic arrogance and loyalty to the Trump brand is a straightjacketed offense on truth and the rule of law. A universe of animosity and spite. A universe of fraud and deceit. A universe which left the populace uncertain, fearful, and immobilized when facing something as life-threatening as a pandemic. And make no mistake, that universe is, and will remain, a threat to democracy.

When forming the republic, the framers brought to the floor of Congress reason and logic through balanced honest debate and constitutional checks on equal branches of government. These founding patriots would be astonished to find a national party tumbling down a ‘rabbit hole’ of lunacy for a wannabe king’s nonsensical dreamscape power play while abdicating responsibility to the passing of the torch of democracy.

Designing our constitution, the architects of government studied and politically scrutinized the ancient Greeks. They found that demagogues, or government agitators, gave an explanation to their long-ago cycles of continual devastating regimes. To gain advantage, demagogues manipulate the people through desires and prejudice rather than rational arguments, continue by getting down to business as troublemakers and instigators, and end as tyrants. Sound familiar?

America’s founding proposition of the capability of a people to govern themselves through free and fair elections was a stalwart premise by which President Lincoln demonstrated a strong conviction to its importance. Lincoln never considered delaying or suspending an election and believed that “preserving the union and its constitution required that its ordinary mechanisms of democratic life keep functioning to validate the republics existence.” Lincoln sought to “trample down … the grapes of wrath …” by pressing for a full surrender; a faith-based judgment for insurrectionist and seditious wrongful deeds.

When the seven states of the confederacy seceded from the United States of America, their leadership explained that they would be “founded upon exactly the opposite ideas” proclaimed in the Declaration of Independence. They let the world know, in no uncertain terms, “that slavery and subordination to a superior race was — what they believed to be — the natural and moral condition.”

And to this day, under their thin veneer of false virtuousness, nothing is too sacred for the ambition of these erroneous so-called patriots. These white supremacists who display fealty to hate, to the noose, the guillotine, and torture as civilized and justified. And those who fund, profit, incite and enable their acts of unlawful transgressions are no different as if they wielded those weapons themselves.

The Biden Administration will build back a country where resourcefulness of strength through enterprise is made even stronger with equitable community investment. From health care to voting rights, from the environment and immigration to racial injustice and national security, and from education to the economy — an ambitious first 100day plan will entail well thought out solution driven policies to put America and its people back on track.

This is why the 2020 election was so important. It was a day of trial for our country. Actions met consequences. The majority of the American people sent a clear and concise collective message. A message of affirmation that, we the people, will continue to “preserve, protect, and defend” the Constitution of the United States of America.

As we seek that newer more equitable world, we know that being American means free and fair elections, and that the voter – not the president — is the highest authority.