FROM THE LEFT-The Daily Commercial: The tale of two statues 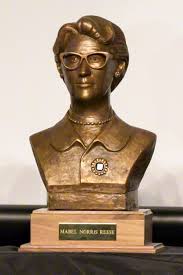 The tale of two statues

Once upon a time there was a Central Florida county that had the unusual distinction of possibly receiving two controversial statues in 2020. One statue was of a man and one was of a woman, which was remarkable in itself as only about 10% of statues depict women.

The male statue was bronze, larger than life and situated on an impressive pedestal of many tons, and had been ensconced previously in the U.S. Capital’s prestigious Statuary Hall for a century as one of the two statues assigned to every state and represented Florida.

The statue of the woman was only a bust made of terra cotta and was purchased through many small contributions from citizen donors through a fund raising campaign organized by Gary McKechnie who admired her intelligence and tenacity.

The male statue of the Confederate officer is General Kirby Smith, in full battle dress regalia replete with boots, spurs, sword while the much smaller female form of newspaper editor Mabel Norris Reese is clothed in a simple cotton wash dress from the 1950’s.

Smith’s arrival in this Central Florida county was engineered by the state legislators who were suddenly embarrassed after a century to have their state represented by a military figure that advocated the overthrow and dissolution of the United States of America, and was a slave owner as well. It was not relevant that Smith had never been a resident or even a visitor to this Central Florida Ccounty and had been rejected immediately by his birthplace of St. Augustine who, like the Legislature, didn’t want to enshrine such a controversial figure in their pantheon of heroes.

The Legislature then endeavored to commission a statue of Mary McLeod Bethune as a more acceptable and deserving substitute in Statuary Hall in the U.S. Capital. So Kirby Smith had to go somewhere to make room for the new Bethune statue.

The so-called “curator” of the Lake County Historical Museum seized upon an opportunity to obtain the Confederate States of America general as the centerpiece of his small, unremarkable collection in the museum. He first obtained financing from several pro-Confederacy groups to finance the considerable transportation costs of $10,000 required to install the general in all it’s glory in his museum.

Through a serious of conversations and secret meetings with the Lake County Commission, the “curator” obtained enough votes to bring his Confederate general into the taxpayer-financed museum over the objections of many citizens who were enraged over his questionable process.

Meanwhile the statue of Reese, the crusading editor of the Mount Dora Topic newspaper, was unveiled in Mount Dora on Sunday, Jan. 12. Through the Pulitzer Prize winning book The Devil in the Grove by Gilbert King, the citizens learned of her role in exposing the true story behind the capture, murder and unlawful incarceration of the four WWII army veterans who came to be known Groveland Four. These facts led to the exoneration of the Four in 2018 of the false rape charges.

Of course, Reese was persecuted for her editorials during the 1950s and endured bombings, death threats and Klan cross burnings before she finally fled Lake County with her family. Her newspaper business had been ruined by Sheri Willis McCall who would continue his reign of terror as Lake County’s chief law enforcement officer until the 1970s.

From the safety of Volusia County as a reporter for the Daytona Beach News Journal she would continue to advocate for civil rights for African Americans, the poor and mentally ill persons until the end of her life.

At the Reese statue unveiling there were speeches, a roundtable discussion and a lecture from author Gilbert King to a full auditorium of admiring Lake Countians. Her granddaughter was present as well for the banquet that evening.

I wonder what sort of reception the Kirby Smith statue will receive if it is eventually brought to Lake County where emotions run high over the installation of a symbol of enslavement and divisiveness?