FROM THE LEFT- The Daily Commercial: The definition of a Democrat 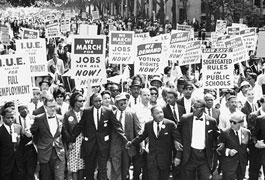 FROM THE LEFT
The definition of a Democrat
The definition of a Democrat is an advocate or supporter of democracy. The Democratic Party believes in equal opportunity regardless of gender, race, religion or sexual orientation. It has been in existence since the 1790s, is the oldest “voter based” political party in the world and the oldest existing party in the United States.
While the party has had its dark side from the southern wing — which later moved into the Republican party — such as supporters of slavery and hate groups, it has moved forward with change for the betterment of our country. It’s been responsible for more positive changes for our citizens than any party. Whether social change or financial growth, the Democratic Party has led the way.
Some achievements of the Democratic Party are:
• Women’s Right to Vote — With the support of Democrat Woodrow Wilson, the 19th amendment was passed to give women the right to vote.
• Social Security — Democrat Franklin D. Roosevelt signed the Social Security Act into law. Millions of retirees benefit from this program.
• Minimum-wage law — Democrat Franklin D. Roosevelt signed a bill that banned “oppressive child” labor and set a minimum hourly wage.
• Unemployment insurance — Democrat Franklin D. Roosevelt, signed a bill preventing unemployed workers from starvation while seeking employment.
• FDIC Insurance — Democrat Franklin D. Roosevelt signed a bill protecting citizens savings from bank failures.
• G.I. Bill of Rights — Democrat Franklin D. Roosevelt signed this bill to provide benefits to Veterans that allowed them to go to college and get home loans. This created an economic boom that helped to create America’s greatest generation.
• First Man on the Moon — Democrat John F. Kennedy’s actions helped define the greatness of America. This has led to technological inventions from electronics to medical, making our lives better.
• Civil Rights Act of 1964 and Voting Rights Act of 1965 — Democrat Lyndon B. Johnson signed these legislative acts, which outlawed discrimination of any kind based on race, color, sex or national origin and prohibited racial discrimination in voting. Medicare and Medicaid — Democrat Lyndon B. Johnson signed legislation to provide medical insurance for the elderly and the poor. Over 58 million Americans today have health insurance because of this legislation.
• Family and Medical Leave Act — Democrat William J. Clinton signed this bill requiring employers to provide employees with job protection and unpaid leave for medical and family reasons.
• Affordable Care Act — Democrat Barack H. Obama signed this legislation to expand medical protection for an additional 24 million citizens. In addition, it established consumer protection for health insurance by preventing insurance companies from denying coverage to anyone because of pre-existing conditions. It also placed limits on how much more insurers can charge seniors and it allows children to stay on their parents’ policies until age 26.
• Budget Surplus — Democrat William J. Clinton showed a budget surplus of $69.2 billion in 1998, $76.9 billion in 1999 and $46 billion in 2000 — the last president to show surpluses.
Democrats continue to pass legislation on education, financial protection, NATO, the environment, etc. to help Americans. To the contrary, it’s hard to find any meaningful legislation passed by the Republican Party to help working and middle-class Americans.
Republicans have tried to turn back voting rights, do away with financial protections and overturn medical insurance protection, just to name a few.
The economy has grown under Democratic administrations. Franklin D. Roosevelt pulled us out of the Great Depression, William J. Clinton had one the most prosperous and peaceful periods in our country’s history and Barack Obama pulled us from the depths of the great recession created by a Republican administration.
The Democratic Party has always worked for working and middle-class Americans. The election of 2018 showed Americans turn to Democrats for their well-being. It’s time to support the party that not only cares, but acts in the best interest of Americans.
If you care about equality for all, education, our environment, healthcare and our economy, you should be a Democrat.