FROM THE LEFT- The Daily Commercial: The color of courage 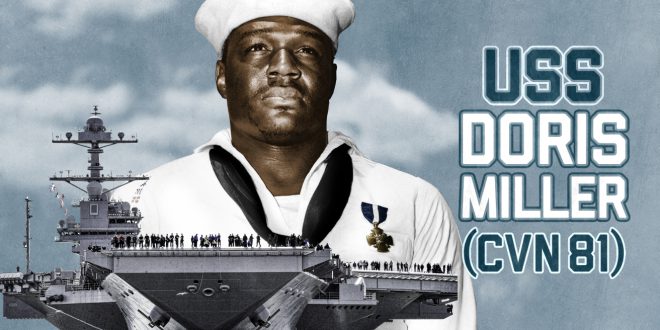 The color of courage

Acting Secretary of the Navy Thomas Modly announced in a small ceremony at Pearl Harbor that CVN-81, a nuclear aircraft carrier, would be named for Mess Attendant First Class Doris Miller.

This was historic because a carrier had never been named after an enlisted man and certainly never for an African American man. Currently the U.S. has 11 commissioned carriers with names like presidents Truman, Roosevelt, Washington, Lincoln and JFK. All white men.

Not many people know Doris Miller’s name or much about him. Born in Waco, Texas, the son of share croppers and grandson of slaves, he joined the Navy for the steady pay. After training in Norfolk, Virginia he was assigned to the USS West Virginia as a mess attendant.

Black sailors were not allowed in combat positions, but relegated to serve only as cooks and doing laundry. On Dec. 7, 1941, the West Virginia was docked at Pearl Harbor. Miller had just finished serving breakfast to the CO and was in the captains cabin folding laundry when the Japanese attacks started. Miller rushed to check on the captain who lay mortally wounded on the bridge. Realizing that there was little return fire on the attackers, he grabbed a mounted 50-caliber Browning anti-aircraft machine gun, for which he had no training, and fired, shooting down three or four Japanese planes before he ran out of ammunition.

Black sailors were forbidden to touch the guns, but he did it anyway. Miller, then 22, was ordered to abandon ship but stayed to help carry wounded sailors to safety, including the dying captain. He was among the last three to leave the battered, sinking West Virginia.

At first, the Navy brass did not want the story circulated because he was black and had broken the rules in the act. But when President Franklin Roosevelt was told, he ordered the Secretary of the Navy to release his name and award him the Navy Cross for valor in combat, the first African American ever to receive it, pinned on his chest by Pacific Fleet Commander Admiral Nimitz, after whom another carrier is named. He perished aboard the Liscomb Bay when it was sunk by a Japanese torpedo in 1943.

It turns out that heroism has no color, except for the shared color of the blood that you are willing to shed for your country. When our country needed a hero to stand up and defend her, the color of his skin did not matter. Doris Miller was that hero.

Thank God there are still hero’s like him who stand up and break the rules, rising to the occasion and display true patriotism. Lt. Col. Alexander Vindman is also such a man. He took an oath to preserve, protect and defend his country and then stood by that oath when his country needed him.

Further, the ship will be built at Newport News Shipbuilding in Virginia. The steelworkers union president told me recently that the workforce there is currently 60% people of color. Descendants of slaves, children and grandchildren of sharecroppers themselves, much like Doris Miller, will build this ship.

Their ancestors were first brought to these shores on slave ships over 400 years ago, arriving at a port barely 30 miles from this shipyard. Some shipbuilders will begin their careers on the 10-year construction and some will retire on it. Either way, it will be an honor to finally work on a ship named for one of their own.

Black history is a rambling tale of abuse and betrayal by this country and yet standing up to defend her in her hour of great need. It is a lesson for each of us today. When the moment arrived for our current leaders to stand and take their place in history as hero’s, they instead shamefully declined in the face of a tweet.

Doris Miller is a true American hero. We desperately need more like him today.

And now, rising from the sea, a behemoth memorial to his heroism. A floating city that, like him, is capable of striking back at attacks anywhere in the world. The toil of mostly, also like him, descendants of slaves and worthy of a hero’s name: the USS Doris Miller.