FROM THE LEFT- The Daily Commercial: Storming the SCIF nothing but GOP a stunt 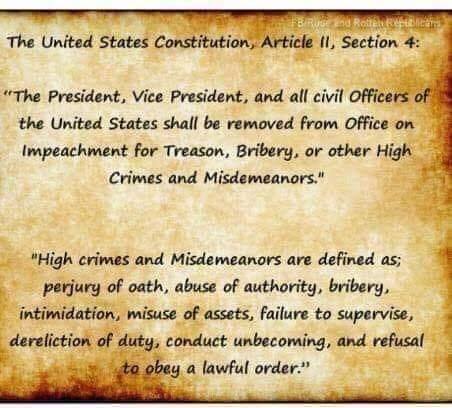 Storming the SCIF nothing but GOP a stunt

In a stunt that gives new life to the old adage, “When you have no defense, pound the table,” Florida Congressman Matt Gaetz lead a storming of the SCIF on Wednesday to protest the impeachment inquiry being held in “secret committees.”

The SCIF is a Sensitive Compartmented Information Facility. It is used when there is information that should be related securely.

The stunt was proposed by the White House and orchestrated by Gaetz. The demonstration was supposed to show the TV viewers, mainly Trump, that what’s really going on here is a “secret impeachment.”

There were a few hiccups, better know as the facts. These “secret meetings” are being held in the SCIF because of the very threats posed to the safety of the witnesses that was demonstrated by these congressmen. These protesters seemed to portray the meetings as only Democrats, when in fact they are bi-partisan and some Republican members who were allowed into the meetings chose to stand outside and protest instead of taking the seat reserved for them inside.

More importantly, they are being held in secret so that witnesses can’t coordinate their testimony with others, mainly the White House.

Looking back a short time ago to the confirmation hearings of Judge Kavanaugh to the Supreme Court, these same congressmen were on TV screaming their indignation that citizens were inside that same Capitol building protesting, calling it “mob rule.”

And if we care to look back further we should note that some of these same congressmen participated robustly in three years of secret meetings on Benghazi, unsuccessfully trying to unearth a crime by then Secretary of State Hillary Clinton, making the current stunt by them extremely hypocritical.

Several of the participants were carrying their cellphones and some were even tweeting and live streaming the event to show their constituency of one, the president, how robustly they were defending him.

Let’s be clear, it is a felony to carry your phone, computer or any other electronic device into the SCIF. I’m not sure what look they were going for, but what they got was showing the American people how lawless these “lawmakers” have become. Not kidding, that is their actual job, making the laws for the United States of America.

In a separate matter that same day, lawyers for the president again pounded the table by arguing that the proposal by Trump that he could shoot someone on 5th Avenue and get away with it because he is above the law is true, he cannot be charged with a crime. And Republicans, at least 30 or so of them, proved that they are willing to be at the other end of that bullet, that they are willing to commit a felony for him.

So the U.S. is indeed in a time that we have never seen before and one which the framers of the constitution could never have imagined. We have a lawless president and a portion of our Congress that is willing to break the very laws that they themselves have written in his defense.

Matt Gaetz was on TV last week trying to defend his protest and instead spent time objecting being called a “white male.” Not sure which of those two words he objected to most, but okay.

When asked why the rules don’t apply to him, he said not the rules but the precedent dictates that he should have had an explanation from the speaker of the House about how the process was to be conducted. Really?

When pressed about whether he thought it was okay for anyone to trade military aid for political favors, he danced in circles, then finally admitted that it was “not appropriate,” which completely discounts the confessions.

We have three so far. One by the president himself under a helicopter on the White House lawn, one by Rudy Giuliani on TV and one by White House Chief of Staff Mick Mulvaney.

Realizing what he had just admitted, conspiracy theory Congressman Gaetz then launched into a tirade claiming that Ukraine hacked the elections in 2016, not Russia, despite all of the evidence to the contrary.

To say that the protest and the interview didn’t go well is an understatement.