From the Left- The Daily Commercial: Socialism isn’t something to fear, already we enjoy collective benefits Barbara Hill Columnist 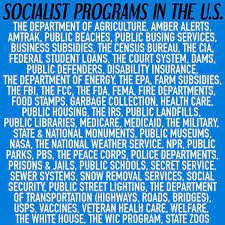 From the Left- The Daily Commercial: Socialism isn’t something to fear, already we enjoy collective benefits

“Socialism” is the word Republicans use when they want to engender fear in voters. I call it the “GOP boogeyman.” What is socialism? It is an economic and political system where the workers control the means of production, such as machinery or farmland, instead of their bosses. The people who advocate this cooperative society are called socialists.

Another key belief is that goods and services should be produced for the people’s use, not for profit. Although true socialism does not exist in our country, nor do we want it to, socialist programs do. Why? Because most Americans want every man, woman and child, no matter their race, color, sexual orientation or creed, to have the same opportunities to “live the American dream” whatever that dream may be.

Our country, like many other developed countries in the world have socialist programs, programs paid for by the government and enjoyed by many. For instance: Medicare remains the most popular government program, and Medicaid provides taxpayer funds for low income folks to obtain health care.

Also, the State Children’s Health Insurance Program provides insurance for children from poor families; and now we have a much-needed child-tax-credit that strives to lift the burden of child poverty.

Then we have the Veteran’s Health Care Program, where military veterans are provided with basic health care for those folks with either physical or mental health problems or both and need care.

Another extremely popular program is the tax we pay during our working years called “Social Security.” For many seniors, this is their sole source of income. Fortunately, meals -on- wheels (funded by the government and private sources) is a program available to seniors who have limited income and/or are homebound.

How about public schools? In the past, federal and state governments provided a good public education because private schools were too expensive for most families. Now the GOP, especially in Florida, gives billions of dollars, which should go to public schools, to charter schools, private religious schools (in violation of the Constitution), and voucher schools.

They sell this concept as school “choice,” although public schools are the only schools whose teachers are subject to strict scrutiny by the state. However, no matter what type of school your child attends, because of socialism your child can get an education.

For our leisure we have public libraries that loan us books and videos, allows us to do research, or just sit and relax. Another is public parks where we can enjoy the outdoors and allow children to play on swings, seesaws, etc. Museums can be privately owned, but most are commonly taxpayer-funded state, national, and federal museums.

The Public Broadcasting System presents non-partisan news and information to the public. With the help of public donations, they are responsible for Sesame Street, Masterpiece Theater, etc. Surveys indicate PBS is literally the most trusted name in news.

Other important programs include the Environmental Protection Agency created by the Nixon Administration to protect human health and the environment.

In addition, we have the Pentagon, Department of Homeland Security, and the military. The U.S. military is the biggest socialist program in our country. We are all protected by the military, whether we like it or not, whether we pay taxes or not. The Pentagon is funded by taxpayers to oversee our defense system, and DHS, a federal agency created after 9/11 by President George W. Bush, is the largest defense department in the country.

Most of these are government-run, taxpayer-funded socialist programs, agencies, and laws. Sure, churches and charities can help; however, they can’t provide free lunch for school kids in an entire city. They can’t pave our highways. They can’t feed every hungry individual and can’t house all of the homeless.

For me, government assistance is not a call for government dependence, it is a hand-up when someone is most in need. I believe in hard work and all of the rewards that come with it. A completely socialist nation would not work, but neither would a completely capitalist nation work.

All I’m really saying is our society is best when it’s compassionate. When the economy goes south, we need to be there for each other. The only way to do this effectively is through government support.