FROM THE LEFT-The Daily Commercial: Remember our dark history, but don’t celebrate it 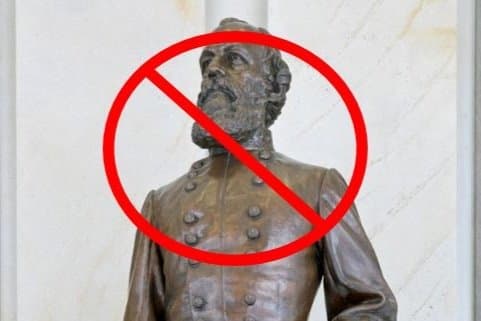 Remember our dark history, but don’t celebrate it

As the contentious decision by the Lake County Commission to place a statue of Confederate Gen. Edmund Kirby Smith in the Lake CountyHistorical Museum comes to light among the general public in high schools and community colleges across Lake County, a slow and heavy youth outrage has begun to build.

I personally went to the march against the statue and was disheartened to see that youth turnout was weak and most of my peers were unaware of this catastrophic decision made on behalf of Lake County officials supposedly representing us. While most teenagers across the county indulge in blissful ignorance , our community leaders exploit this for their agendas.

The drawling argument for the fall of Confederate monuments has been a debate used across the nation but more often than not teenagers aren’t aware of the ramifications of such controversial symbolism. Most students find out about the grueling racial history of Lake County, when in AP U.S. History, a junior year class.

Pushing my peers to learn about horrifying incidences such as the Groveland Four shootings truly have put into context why there is an outrage concerning the movement of a Confederate statue in our locality. Confederate monuments and symbols only had their most remarkable resurgence during the Civil Rights era, as an active symbol of resistance against the equal treatment of African Americans and people of color.

So since the sensitivity of history does not resonate with the Lake County Historical Commission, I think I should just answer the hot questions that have been floating around.

“The confederate statue is a symbol of history.” History can be acknowledged without being celebrated. Putting an unrelated confederate general in a county museum that hosts the history of the brutal killing of four innocent black men is not a acknowledgement. Removing racism from the equation, the history does not line up. South Africa does not host symbols of Apartheid in government buildings. Germany does not boast busts of Hitler to commemorate their past of ethnic cleansing.

This attempt to “commemorate history, good or bad” mindset is going to painfully hurt the youth of Lake County. As I talk to teens from Tavares to Clermont, the connotation they hold with Lake County is increasingly tinged with the impression of racial ignorance our elders behold.

The moment that statue goes up, I promise one thing. The increasingly diverse and intelligent youth of Lake County will not return. We will go off to college and remember our beloved childhood community as a place that failed to learn from its own history, let alone commemorate that of unrelated racists.

An embarrassing headline that forever will hold weight to the youth, that our local leaders decided to revive and revere our dark racial history and bring about a racist monument into our historical museum in the year 2019.

Their striving for the glorification of a racist legacy does not end with them. It will continue to have negative ramifications beyond theirs and even my own lifetime. For the people who seem to care so much about the past, I ask that they consider the future.