FROM THE LEFT- The Daily Commercial: Protecting your right to vote 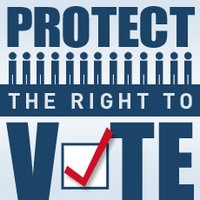 Protecting your right to vote

Each morning when I pour my first cup of coffee, I have to make a decision. Do I go outside and sit peacefully watching the flowers in my garden sway in the morning breeze, or do I head for the den and snap on the TV to begin the mega download that is today’s news. Sometimes, to save my sanity, I would really prefer not to know what is going on. Of course, being innocently ignorant doesn’t change the news, it only spares your reaction to it. Some of today’s news can be downright frightening.

One such case is when the news came out that Russia had attacked our country through cyber hacking our elections. There was such disbelief that came over me that I find hard to shake over two years later. And they did attack us just as brazenly as if they landed on our beaches and rained gunfire down on all Americans. Just because it was a cyber attack doesn’t make it any less of an attack. This fact is accepted by virtually all Americans. It is the second line in the Mueller Report.

The right to vote is ensconced in the constitution. It is the bedrock of our democracy. It must be protected at all costs. It is the most important act of citizenship that anyone can do. It is a reaffirmation of our Americanism. It says that I am a citizen. I care and I vote to show my country that I care.

We have a faithful trust that when we cast our vote, it will be counted without the interference of candidates, elected officials or foreign adversaries. But that trust has been forever shattered. We can no longer believe in the integrity of our vote because we know that it was tampered with and no one is doing anything about it.

Particularly disturbing was the news last week that the newly installed governor of Florida was told by the FBI that the voting machines in at least two counties in our state were hacked during the 2016 election. But he couldn’t tell us which counties were hacked because the FBI made him sign a nondisclosure agreement. What else are they not telling us? Could there be more counties involved?

If we are not allowed to know the extent of the vote tampering in Florida, how can we blindly trust the results? And the bigger question: Why don’t they want us to know?

President Trump is so afraid of the truth that he had his attorney general come out with a public statement that  missrepresented the findings in the Mueller Report. Admitting that the findings of the special council are true would be to admit his election was not fair. There was cheating. Governor DeSantis, like Trump, can’t criticize or delegitimize the vote that swept him into office.

To tell the public that the vote was tampered with is to tell them that we are not sure of the results.

He has correctly calculated that if he admits that the vote was hacked, then it could mean that he did not win fairly.

But where do the rights of the citizens come in? What about our right to have free and fair elections?

I remember a short time ago when Republicans were screaming about illegals voting in our elections.

Investigations and accusations were flying all around.

Of course, it all turned out to be untrue. So the difference here is that we actually know that it is true that Russia interfered in our elections, particularly two counties in Florida and noting their history of distorting the truth, there may be more. So where are the Republican voices now? Where is the outrage? When they made up a fake voting scandal, there was widespread screaming and indignation, but the truth seems to bring silence.

I want to know that my vote counted. Don’t you?

If we are not allowed to know the extent of the vote tampering in Florida, how can we blindly trust the results? And the bigger question: Why don’t they want us to know?