FROM THE LEFT-The Daily Commercial: Law doesn’t require Confederate statue to be in museum 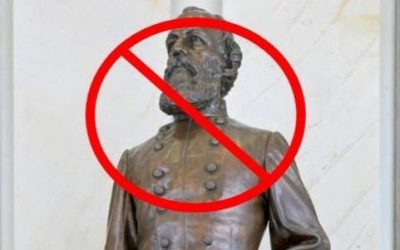 Law doesn’t require Confederate statue to be in museum

Something is amiss here in Lake County. Let me explain: Florida Senate Bill 472, the law which enacts the replacement in the U.S. Capitol of the Confederate Gen. Edmund Kirby Smith statue with that of Mary McLeod Bethune, provides clear and unambiguous guidance on what to do with Florida’s returned Confederate statue.

The bill states, “The Division of Cultural Affairs of the Department of State shall take possession of the returned statue and make the statue available for public display.” Read it for yourself. No mention of a museum. Not a word.

Then why are certain Lake County elected officials insisting that the legislation mandates the Kirby Smith statue be placed in a museum? The law clearly permits the statue to go to a public cemetery, battlefield site or a state facility.

I thought she was simply relying on museum Curator Bob Grenier’s notoriously deceptive accounts of facts related to the acquisition of the statue.

On Oct. 25, Commissioner Campione, in a letter to local black churches and civic organizations, sought to justify her support of the Historical Society’s decision to include this unrelated Confederate statue in the County Historical Museum.

In her letter, Campione repeated the lie that, “One of the conditions of the relocation of the Smith statue from inside of the U.S. Capitol building was the requirement that it be placed inside a public museum in Florida, not a cemetery or in a private collection. Placing it in a State museum in Tallahassee was not an option provided for in the legislation.”

During the public comments period at the Nov. 19 county commissioners’ meeting, I read them Senate Bill 472, reminded commissioners that neither the formal 2018 public notice for how the Ad hoc Statue Relocation Selection Committee would determine where the statue would be publicly displayed nor the proposal review form or the scoring rubric used referenced any requirement for the statue to be placed in museum.

I told the commissioners that I had personally contacted a representative from the Architect of the Capitol’s office in D.C. This representative confirmed that the statues were managed under the Joint Committee of Congress on the Library and they had no requirement for the placement of the returned Kirby Smith statue except that it could not to be sold, damaged or destroyed once it became property of the state of Florida.

As anyone who lays out indisputable facts would expect, I thought this particularly offensive lie about the Confederate statue would cease and desist. Not so. Instead, others like Lake County Property Appraiser Carey Baker and Commissioner Tim Sullivan picked up the propaganda baton and marched forward with the deliberate misreading of the law.

I spent some time wondering why they would do this when what they are saying is so easily refutable. Then, as a law-abiding citizen, I understood why.

If you tell Mae Hazelton that something is required by law (i.e., paying taxes, vehicle registration, etc.), then I obey those laws because they are honestly interpreted and I see them as legitimate authorities. You see, law works as a focal point to help people avoid conflict or other undesirable situations.

And there you have it. If elected officials falsely tell enough people – folks who believe in the legitimacy of the law — that Florida law says the Confederate statue must come to a museum in Lake County, then law-abiding citizens who don’t know the actual truth but want to avoid conflict with the law will believe them.

When Leslie Campione and others don’t have “right” on their side, they twist the truth to block any further opposition against carting this unrelated and hurtful statue to Lake County by saying, “It’s the law.”