FROM THE LEFT-The Daily Commercial: It’s not democracy if a minority rules 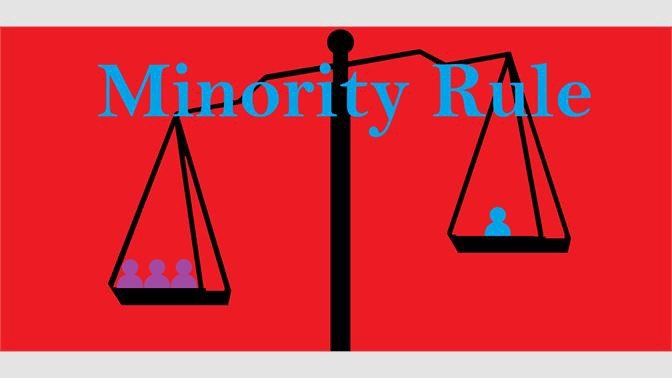 It’s not democracy if a minority rules

The flaw that is the root cause of the problem is the Electoral College, which was a compromise between the slave-holding states and the non-slave states. The Electoral College was created as a gimmick to allow the slave states to have their huge slave population impact the presidential election. The reason the slaves could impact the presidential election was another compromise made between the slave states and the nonslave states, the 3⁄5 ths clause which counted slaves as 3⁄5 ths of a person in determining the number of representatives in the House.

In 1824, Andrew Jackson won the popular vote, but no Electoral College majority. The election was decided by the House of Representatives with each state having one vote. John Quincy Adams won of the 25 votes cast.

In 1876, Rutherford Hayes became the president after losing the popular vote to Samuel Tilden, who had over 50% of the popular vote. Twenty electoral votes were in dispute and a commission of 15 members was created to settle the issue. All 20 disputed votes went to Hayes, swinging to balance to him. Tilden did not protest to avoid civil unrest in the nation.

The Supreme Court by a 5-4 vote decided the election by voting to not allow a recount in Florida. Al Gore in the interest of national unity did not protest.

The Electoral College reared its ugly head again in 2016, when Hillary Clinton won the popular vote by nearly 3 million votes.

Third-party candidates had another 7 million votes. Florida cast 9,165,556 votes in 2016, and with 29 electoral votes, had one electoral vote for very 316,000 votes cast. Alaska cast 246,588 votes and with three electoral votes, had 1 electoral vote for every 82,999 votes cast. The second constitutional flaw which was on display is the “Great Compromise” which settled the dispute between small and large states. It gave all states representation based on population in the House and equal representation in the Senate. It is a problem that was not that bad when the largest state was only 10 times larger than the smallest. Today the gap is 40 times larger and growing.

The Senate has become the most undemocratic legislative body in the world, 10 states with half the population have 20 senators, the 40 states with the other half have 80 senators.

How many would like to see Florida change the state Senate to 67 members and give each county one senator?

The third flaw on display is the impeachment clause compromise.

It gave the Senate the power act as the jury, relying on a oath taken to be impartial. The founders tried to get the judiciary involved, but failed, giving them a token role by having the chief justice preside over the trial, without any assigned powers.

Sen. Lamar Alexander said Trump was guilty as charged, but the people, not the Senate should vote to remove him. Oh, how I wish that were true! As it stands, the Electoral College could again thwart the people’s wishes in 2020.

The 47 Democratic senators were elected with 19 million more votes then the 53 Republican senators. Four of the nine members of the Supreme Court were appointed by presidents that did not win the popular vote.

We have become a nation that has rule by the minority of voters, instead of the fundamental principle of any form of democracy of rule by the majority.