FROM THE LEFT-The Daily Commercial: It's going to be a long walk home, America 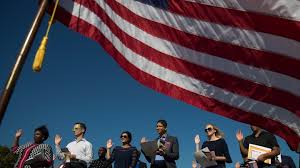 It’s going to be a long walk home, America

When Barack Obama won the presidency in 2008, the GOP immediately scrambled to check their health care policies for coverage of broken brain syndrome. The power shift that came with that win was too much for Republicans to reflectively absorb. Too much minority, too much diversity, and too much blackness with too much power.

To quell their brain fog incomprehension of what many in the GOP wrongfully feared would be a dystopian future especially for rich white folk, an order was dictated, produced, and funded by a fiercely conservative corporate force known as the Koch Foundation, run by family-fortune oil magnates and far-right libertarians who view predatory capitalism as the only real social safety net Americans need.

The Republican solution to the 2016 Democratic win became a so-called grassroots assemblage that rose up from the ashes of right-wing libertarian foundation money, now known as the Tea Party movement. This new 21st century society, fueled through the ghost of John Birch and Koch Foundation money, espoused the beginnings of what was to become the “make America great again” tenet — a gullible guise of middleclass tax cuts made whole with an economy that magically trickles down, a mid-20th century Happy Days of anti-Semitism, bigotry and segregation.

To drive their message home, Tea Party members combined full Revolutionary era regalia with a late 19th century “there’s a new sheriff in town” vibe. Slung over shoulders and hip-holstered, NRA-blessed rifles, semi-automatics, and handguns, began showing up at political events. A “rod of iron” non-verbal trash talk representation of Second Amendment rights. Never giving thought to the “Other” as a version of themselves, this misconception has now led America down a dark path to cruel and dangerous anti-immigration policies.

For decades, the GOP fed the gap against upward mobility. Financialized speculation, where betting on nothing of real value along with destructive predatory capitalism burst the market bubble, setting the stage for recession. The wider and more pronounced the gap between expectation and reality, the less achievable for the worker. Gone was an anchored, stable, safe, secure, real-jobs mainstay economy. An economy where jobs were a purposeful functioning reality. An economy where expectation is an assurance toward a reliable future.

Power, kept in check and concentrated into the hands of the wealthy upper cast class, made it easier to manipulate those faltering from job loss and income stagnation, exploiting the worker to seek safety under a demagogue or a political leader who makes false claims and promises based on emotion, not reason. A leader who makes use of popular prejudices while promising superiority to the faltering by turning on those below them.

Dangling a multiple lure of “God and country,” easy money, protectionism, and ethnocentric isolationist bias, Republicans employed a zerosum game, where a win for one side is a loss for another. The new version of the GOP placed their bets against democracy and on an infamous “money for nothin’ and your chicks for free” guy.

Trump, corruptly ordained and riding a rally high with foreign influence assistance and surefire gerrymandered votes on one end and analytical based suppressed votes on the other, moved to the front of the line. Surrendering to the obsolescence of the truth. Trumpism was made whole.

With revenge-driven wrongheaded benevolent dictator glee, the GOP went for the jugular. Deregulating anything tagged with an Obama signature, predatory and accelerated capitalism bled together to destroy productive policies by cutting the legs out from under social safety nets and positive solutionbased regulation policies. However scrupulous, Republicans justified it all.

The aim of Trumpism is not accuracy, it’s domination. But as the truth became the lie, the coverup became a necessity.

Since campaign 2016, a standard Trump supporter retaliatory line has been, “but this is a different time.” Well, now we have arrived at a new distinct time — time for Republicans to lose their representational governance.

It’s going to be a long walk home America. We must hold fast to protect our constitutional liberties and ideals. “Begin afresh” this sacred land of hope and dreams for all who seek sanctuary. Never forget that flag flying over the courthouse means certain things are set in stone. Who we are, what we’ll do, and what we won’t.