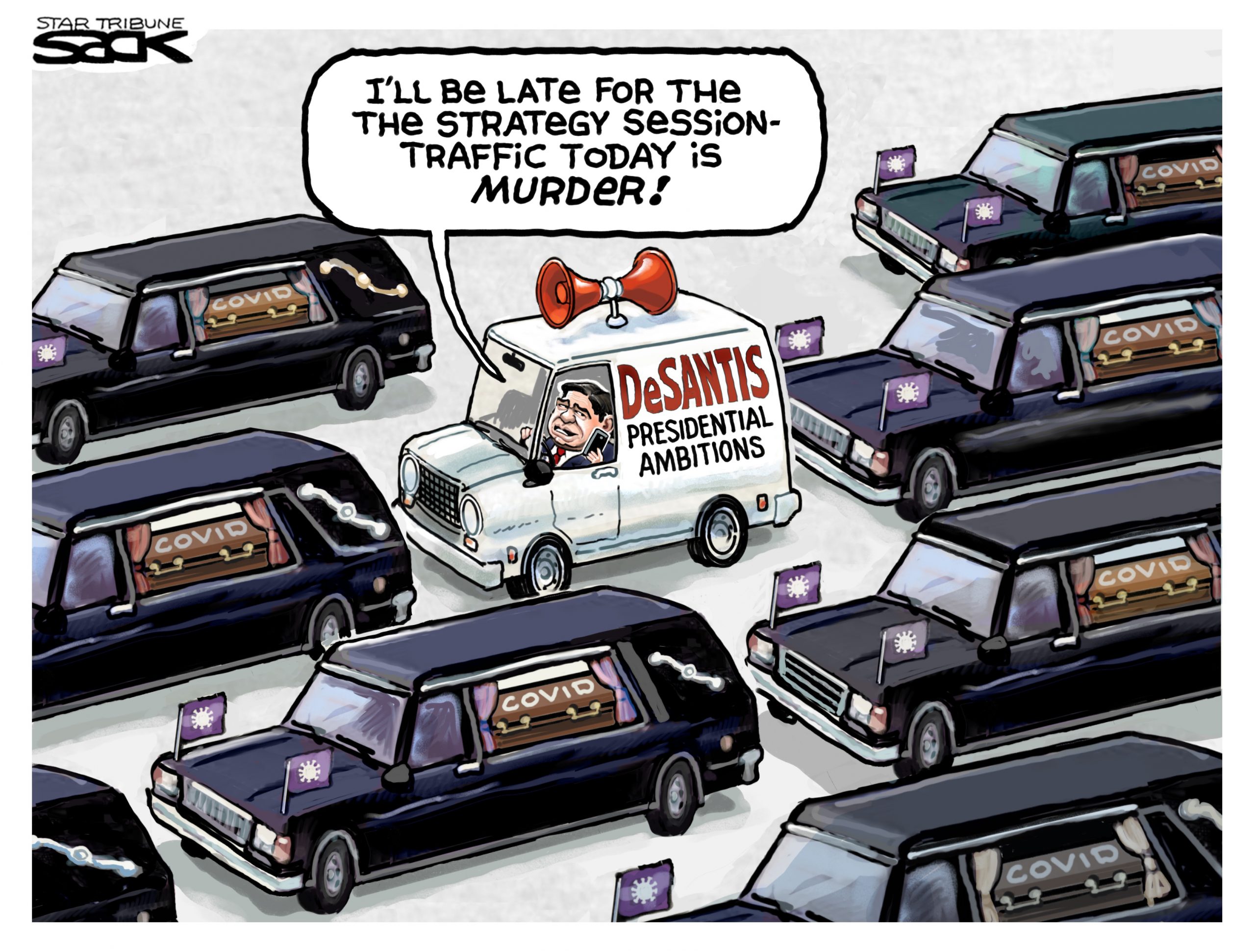 From the Left-The Daily Commercial: Economic fallout caused by the GOP

COVID-19 and the economic fallout from our disastrous leadership during this pandemic is still taking its toll on Americans.

The majority of Floridians shouldn’t have to be concerned about wearing face masks or have the feeling we’re being held hostage to COVID-19; we should have a sense of freedom by now, especially since the majority of us followed recommended safety precautions and got vaccinated — and more than 27% of us got booster shots.

But that isn’t the case because neither ex-President Trump nor Gov. DeSantis treated this pandemic as a national medical emergency or was honest with the American people, putting people’s lives first or using their position to unite our country.

Had Trump used his office to assign someone with experience (not Jared Kushner) to obtain medical equipment and supplies, developed a plan for testing and tracing, and followed qualified medical advice, we might have kept our hospitals from being filled beyond capacity with hundreds of people dying daily. With our high rate of deaths and infections, there was no choice but to shut down, closing businesses and factories, and causing huge unemployment in order to stop the contagion.

DeSantis denied us a chance for freedom from COVID when he followed Trump’s leadership in making it a political issue; giving limited and unreliable information on infections and deaths;  pushing unsafe hydroxychloroquine and spending billions of tax dollars on untested monoclonal antibody treatments with limited effectiveness; supporting the anti-face-masks and anti-vaccination factions of the radical right GOP and their wacky QAnon base, who disrupted meetings and threatened our school boards and city council members — all while banning and fining mask mandates and vaccination requirements at schools and businesses, putting people’s lives in danger.

DeSantis has used the pandemic to advance his autocratic agenda, limiting freedom of the press and restricting voting rights, and passing Christian nationalist legislation (aligned with Putin’s regime), anti-immigration and anti-abortion laws, and anti-minority and education bills that allow discrimination against LGBTQ people and restrict the teaching of Black history.

DeSantis hasn’t restored our sense of security by denouncing the domestic terrorist, anti-government, white and Christian nationalists who attacked our U.S. Capitol on Jan. 6, who still threaten our democracy and the lives of immigrants, minorities and non-Christians with acts of violence. He hasn’t restored economic freedom to our working class by fixing Florida’s reemployment program, affordable housing, health care for low-income workers or addressed the economic damage Florida faces from climate change.

Negligent leadership that forced our country’s shutdown caused a lag in our supply chain for merchandise and, with increased consumer demand, we’ve seen prices rise. But corporate monopolies have added to that inflation by raising prices while their corporations made billions during the shutdown. They could have passed those profits on to consumers. Instead, they’ve bought back stock and paid their CEOs huge bonuses.

During the shutdown, consumers’ demand for gas was low and supply was high, so production dropped, but with the economy heating up and production down, gas prices went up. Putin’s war against Ukraine added to the increased cost of oil. President Biden has taken steps to help reduce the cost of gas for working-class Americans. He is releasing 1 million barrels a day for the next six months from the Strategic Petroleum Reserves. He also has asked the oil industry that made billions during the pandemic to put those profits back into the production of oil and return some of their profits to consumers.

While Trump’s final days in office were directed toward his attempted coup to overthrow our democracy, when Biden took office he worked quickly to obtain a supply of vaccines and a delivery system for all eligible people. Democrats passed Biden’s COVID Recovery Act to help working-class Americans recover from the economic damage done by the pandemic — as well as financially strapped states like Florida. Biden actually passed an infrastructure bill, and his administration has added 7.9 million jobs nationally with wages up 5.6% for the year in February — and unemployment in Florida is 3.3% since he took office. This isn’t socialism; this is a president leading a democracy to save lives and our economy.

Our democracy is at stake. DeSantis and Republicans who showed a callous disregard for lives during this pandemic while pushing their autocratic agenda must be voted out of office.