FROM THE LEFT- The Daily Commercial: Continuing the march toward justice 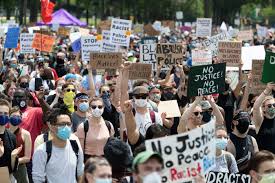 Continuing the march toward justice

What many understand as America’s 400-year-old chronic disease of racism and discrimination, the Republican Party perceives as making and keeping only white heritage great. But there is no right to lay down prejudiced, bigoted and subjugated persecution. There are only lies, cruelty and large-scale abuse of power.

Heritage and legacy are universal truths; no matter from where, or how, on earth one’s journey began before reaching this American land.

Alt-right Republicanism, bought and paid for, has plowed over truth, fact and reason. Steering the once Grand Old Party over the cliffs of racism, revenge, gut-wrenching greed and power-trip delusions, “orange man bad” tumbles head-over-heels with bone spurs into political folly.

Every day, scripted and tweeted directives of hundreds of little banalities of evil, at times imperceptible, prepare us not to be shocked by the next. Street-theatre dictates distract and divert, allowing safety barriers of truth, fact and ethical behavior to break down.

Americans are bearing witness to anti-democratic authoritarianism amid an explosive pandemic health crisis of monumental proportions in which denial, delay and false-start re-openings have led to more than 126,000 individual U.S. deaths.

We are facing fullscale militarized assaults on our constitutional and First Amendment rights. Unidentified secret police. Institutionalized oppression of ethnic, religious and other minorities. Expanded state apparatus surveillance. Anti-government infiltration and corruption of agencies and institutions. And overseeing it all, the expansion of centralized executive power.

Doing little to uphold our Founders’ true ideals and beliefs, transparent Tea Party Republicans pander to libertarianism when a Democrat is in power and embrace authoritarianism when they are in charge. Tea Party Republicanism was never libertarian – it was never fiscally conservative. It looks to be a deliberate strategy to subjugate government, destroy the Democratic Party and exploit working- class taxpayers.

The Republican Party – the party that does not want Americans to vote – passes the buck to white supremacist hate while bunkered off from reality. This altright Republican Party has allowed American exceptionalism to harden in concrete boots of irrational, conspiratorial fear before submerging it into the dark void of autocracy. Republican enablers nurse a viper — a malfeasant, counterfeit leader who abuses and scoffs at democracy while sucker-punching our living constitution.

The Republican’s reelection endgame is a typical Trump/Barr “who’s on first” hornet’s nest of corrupt intent. Attack the legal system’s independence and integrity; use foreign help, on more than one front; and place as many voting barriers and deterrents, no-holds-barred (pun intended), as deemed necessary.

Republican absolutist demagogues refuse to do the hard work of solution-driven policy making for all Americans. Refuse to administratively govern in real time. Refuse oversight. Refuse to adhere to proper checks and balances, skillful management and orderly procedure. Refuse to serve and protect. And refuse America’s constitutional rule of law rooted in justice for all. America is a united construct. A multicultural democracy enveloped within a national union of strength. We are justly tired of blaming the “other” for historical governmental shortcomings.

We are a diverse American skin. Democracy deserves equity. Protecting and defending our democracy is stewardship. We must reform the political process and restore confidence in our constitutional government.

Living a cold and broken hallelujah, we declare liberty for all. We pursue happiness for common good. We grant to others the freedoms that we wish for ourselves — a sustainable balance where life thrives and truth is made self-evident. Releasing a deep breath of communal unease and apprehension, at the end of every hardearned day we gather together to walk in good company and find reason in the belief that until all of us are safe, none of us are safe.