FROM THE LEFT-The Daily Commercial: Confederate Statue: Does it profit or diminish Lake County? 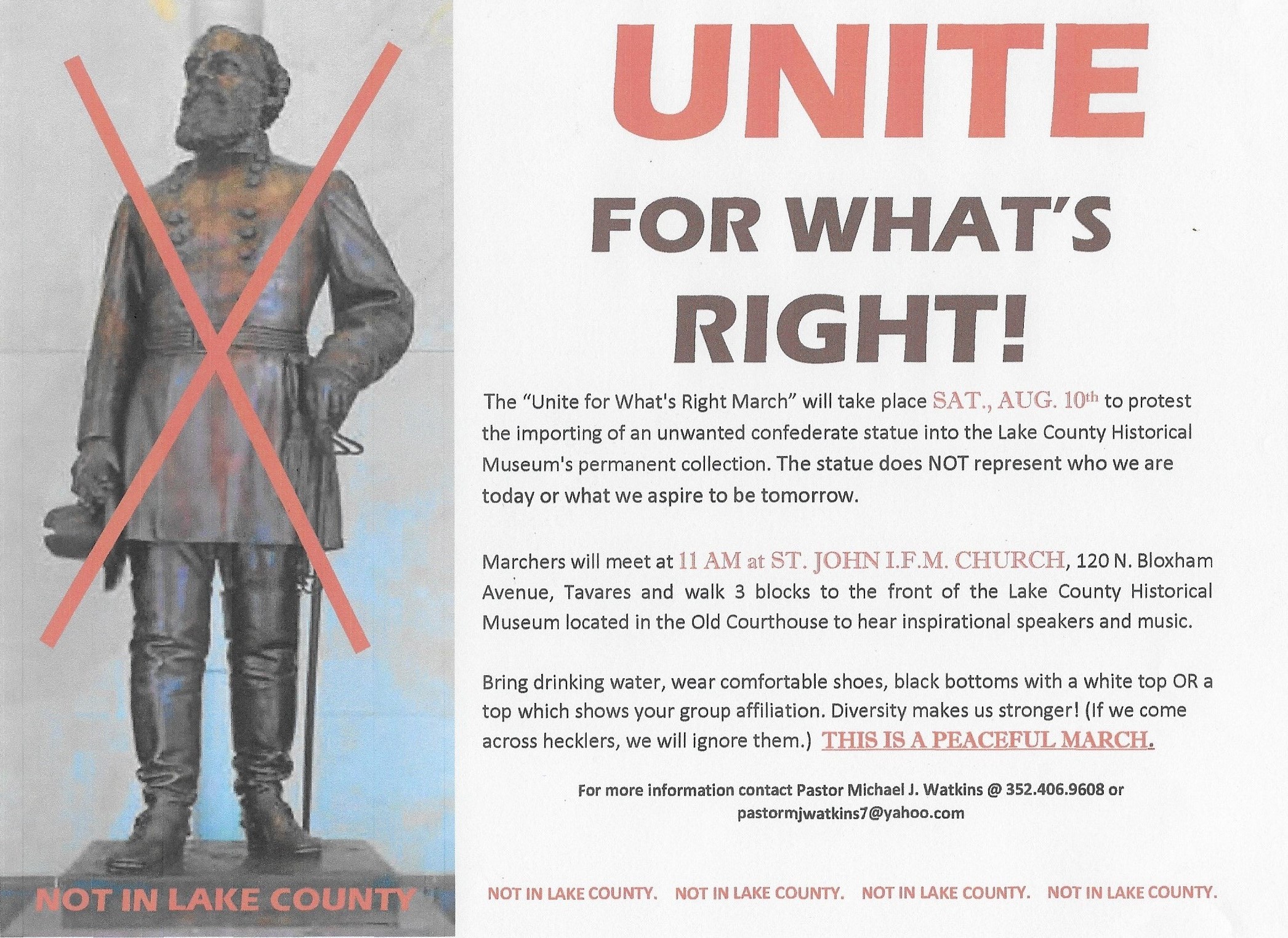 Confederate Statue: Does it profit or diminish Lake County?

Lake County is roiling in the wake of the County Commission’s 3-2 vote to import and erect a Confederate statue in its taxpayer-supported museum. The issue is fraught with emotional pain, the growls from a few alpha-dogs, and head-scratching economic consequences.

It’s time to apply reason and reflection; to weigh-out the pros and cons in a respectful way. As one whose first degree is in history and who also taught economics for years, that is my goal.

Perhaps the best approach is to reflect on a series of questions and gauge whether this idea has merit and whether this statue profits our community or diminishes it.

Here’s the background on the Confederate General Kirby-Smith statue.

The statue was cast in 1922 at the direction of the Florida Legislature. For almost a century it represented Florida in the U.S. Capitol’s Statuary Hall in Washington, D.C.

Several years ago, Florida’s Legislature voted to remove and replace the statue, feeling that it is an inaccurate and hurtful representation of The Sunshine State. The Legislature further required that the statue be offered for free to any Florida community and museum. Every communityand museum replied “no thanks” except one: Lake County.

This statue is now scheduled to arrive for installation at The Lake County Historical Museum next year.

Now to those reflective questions.

Is the statue being welcomed by a large portion of Lake’s population?

The answer is clearly “No.” Nine of Lake’s 14 cities have passed resolutions insisting that the Lake County Commission reject the statue. Additional cities are considering similar resolutions. No municipality has voted in favor of the statue. The Lake County commissioners still have the power to reconsider and stop it.

What happens to the statue if the County Commission rejects it? The answer is probably nothing. Nobody wants the statue destroyed.

However, the statue is owned by the state and it would simply house its artifact elsewhere. A lot of folks aren’t aware that the State of Florida owns and operates The Museum of Florida History in Tallahassee.

It has exhibits of Civil War, Reconstruction and Jim-Crow artifacts. The Kirby-Smith statue would be a fine fit for any of those displays.

Is the statue relevant to Lake County’s history?

Not really. Lake County was created in 1887 — 22 years after the Civil War. Kirby-Smith was born in St. Augustine and left Florida at age 12. He is buried in Tennessee along with his family, and he never visited this area. Even St. Augustine (Smith’s birthplace) was offered the statue for free and turned it down.

Is the statue hurtful to many of our neighbors?

Certainly. Proposing to house the Kirby-Smith statue, memorialized in his Confederate regalia, in the same building that served as headquarters for the infamous Sheriff Willis McCall, transcends insensitivity. It’s clear that this is damaging our community cohesion and dividing our neighborhoods, coworkers and friends. This is self-inflicted damage.

Does installing this statue hurt Lake’s business and economic opportunities? Without a doubt. if Lake accepts and installs this artifact, it will make national news. Lake County will look foolish and backwardand that is never good for business, community cohesion and Lake’s civic reputation.

Finally, one must ask: Is this statue worth the damage it brings our community? What are the reasons that a handful of Lake County elected officials are feverishly angling for this Jim-Crow-era relic that no other Florida community or museum wants?

In conclusion, the Florida Legislature evicted the artifact and wants it to disappear. In a sense, the statue is “radioactive” and the Legislature is looking for a “toxic waste dump.”

I urge the Lake County Board of County Commissioners to revisit their decision and reject the statue.

Our commissioners should simply say, “No thanks. Not here.”

Frank Layne Wood is a retired National Board-certified teacher. He taught economics and American government at Mount Dora High School for 32 years and is a past Lake County Teacher of the Year.