FROM THE LEFT-The Daily Commercial: Case closed, lock him up 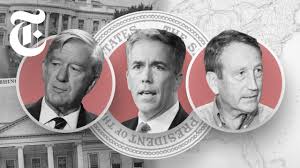 Case closed, lock him up

The electorate knew, like in Rick Scott, ($1.7 billion fine for taxpayer abuse: Medicare fraud) that Don Trump had suspect business dealings and was probably corrupt too.

We knew he had no grasp of the English language, hiding his school records, wealthy-only-becauseof- his-father’s money, confessed sexual assaulter, double divorcee, faux Christian, completely in over his head in foreign affairs, a vile, uncouth, dunce.

During the 2016 campaign Republicans in droves warned us about this grifter. Here are but a few.

Joe Walsh, former Republican congressman, said this about Trump: “He’s nuts. He’s erratic. He’s cruel. He stokes bigotry. He’s incompetent. He doesn’t know what he’s doing,” GOP Sen. Lindsey Graham said the Republican front-runner would make a “terrible commander in chief” and said the Republican Party would get “slaughtered” with him as the nominee. “This is not about who we nominate anymore as Republicans as much as it’s who we are. This is a fight for the heart and soul of the Republican Party,” “The more you know about Donald Trump, the less likely you are to vote for him. The more you know about his business enterprises, the less successful he looks.”

Jeb Bush: “The American presidency is an office that goes beyond just politics. It requires of its occupant great fortitude and humility and the temperament and strong character to deal with the unexpected challenges that will inevitably impact our nation in the next four years.

Donald Trump has not demonstrated that temperament or strength of character. He has not displayed a respect for the Constitution.

GOP Sen. Ted Cruz said of The Donald: “This man is a pathological liar. He doesn’t know the difference between truth and lies. He lies practically every word that comes out of his mouth, and in a pattern that I think is straight out of a psychology text book, his response is to accuse everybody else of lying.” Cruz said, “The man cannot tell the truth, but he combines it with being a narcissist—a narcissist at a level I don’t think this country’s ever seen. Donald Trump is such a narcissist that Barack Obama looks at him and goes, ‘Dude, what’s your problem?’” “The man is utterly amoral. Morality does not exist for him,” Cruz added. “Donald is a bully. … Bullies come from a deep, yawning cavern of insecurity.”

GOP Sen. Marco Rubio used Trump-style tactics against Trump, mocking the businessman for his appearance, his misspelled tweets and his questionable business record. ‘It’s time to pull his mask off so that people can see what we’re dealing with here. What we are dealing with here, my friends, is a con artist. He is a con artist. First of all, he runs on this idea that he is fighting for the little guy. But he has spent his entire career sticking it to the little guy. Every business that he’s ever run that’s gone bankrupt — this guy’s bankrupt a casino. How do you bankrupt a casino?’

‘How does this guy, not one tweet but three tweets misspell words so badly? And I only reach two conclusions: Number one, that’s how they spell those words at the Wharton School of Business. Or number two, just like at Trump Tower he must have hired foreign workers to do his tweets.’

Mark Sanford, Joe Walsh and Bill Weld, candidates for the Republican nomination in 2020 said, in part, on Sept. 13, “In the Trump era, personal responsibility, fiscal sanity and rule of law have been overtaken by a preference for alienating our allies while embracing terrorists and dictators, attacking the free press and pitting everyday Americans against one another.”

Trump is a liar and a loser. The Trump family foundation was found corrupt and a federal judge made them pay a $2 million fine; the Trump University corruption case resulted in a $25 million fine to pay back those he defrauded. Case closed. Lock him up!