FROM THE LEFT-The Daily Commercial: Bills in legislature undermine constitution by Barbara Hill 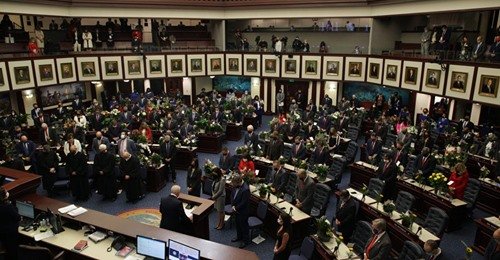 FROM THE LEFT-The Daily Commercial

For 20 years, I was an assistant county attorney for a large county. When the Florida legislature convened each year, we always griped that “no one is safe when the legislature is in session.” But looking at the bills heading to committees this year, I am flabbergasted.

Whatever happened to the constitution, the rule of law, common sense and integrity. This is my complaint, my gripe, about some of the nonsense coming down the legislative pipe for 2021: HB1 – limits the right to protest.

This is a bill inviting, no begging, for a lawsuit. It is an outright infringement and criminalization of the First Amendment’s right of the people to peaceably assemble, and to “petition the Government for a redress of grievances,” which is what protesting is all about and what the First Amendment has stood for since ratified in 1791.

The right to assemble and protest is to bring about change and to let government know where their constituents stand on a particular bill. Further, this draconian bill also allows and (in my opinion) encourages dissenters to drive their vehicles into protestors if they are in the street — this is state sanctioned vehicular homicide.

SB 90 – limits voting comparable to the old Jim Crow laws. The general election during the pandemic was the most successful not only in Florida, but the nation at large; however, because, in Florida, one million more Democrats voted by mail than Republicans, the legislature believes voting by mail encourages fraud. Really? None of the Republican or Democratic supervisors of elections agree.

Sen. Baxley, whose position is term limited, wants to do away with drop boxes. Why? Because this might lead to some type of fraud. Elections officers are up in arms since this creates undue hardship not only for the voters, but for the elections’ offices also. This is what is called “an unfunded mandate,” meaning the elections’ offices need to make this happen without any financial assistance from the legislature.

Sadly, this is not just occurring here, it’s taking place all over the United States where there are Republican legislatures. You think I am exaggerating, but the following is an exchange between an Arizona attorney and Supreme Court Justice Amy Comey Barrett: When Justice Barrett asked, “What’s the interest of the Arizona RNC in keeping out-of-precinct ballot disqualification rules on the books?” The lawyer acknowledged, “Because it puts us at a competitive disadvantage relative to Democrats.” This is the crux of all these proposed laws. Pure and simple – voter suppression.

So, in other words, if the state says the occupation of their choice is not state sanctioned, then you cannot get a scholarship, or you may get a reduced amount. Thousands of students (potential voters and their parents) wrote demanding this ridiculous proposal be scrapped. Because of this outcry, it is, hopefully, being amended as we speak.

SB 810 – DeSantis is angry at the major tech companies who banned Trump’s lies from their websites. All during and even before Trump’s presidency, he spewed thousands and thousands of lies and conspiracy theories. Remember COVID was a Dem hoax? The news about it would stop and the virus would end the day after the elections? Who is gullible enough to believe this nonsense?

The fact is too many people, so the privately held tech companies did what they and many of their subscribers lauded – they banned Trump and other conspiracy theorists. This is another bill seeking a lawsuit since it is well established law, government cannot interfere with private companies operating within the rule of law.

For years, I’ve watched the legislature and governors evade the requirements of the constitution. For instance, giving taxpayer money to religious schools (violation of separation of church and state). Worse, continuing to take taxpayer dollars for public schools and giving it to unregulated voucher schools – no strings attached – operating with unqualified teachers and principals. Why, you may ask, because they want to dismantle public schools one brick and one dollar at a time.

My question: why do we continue to vote against our own best interests? Remember: Dissent is democracy!