FROM THE LEFT-The Daily Commercial: Better days will come shining through 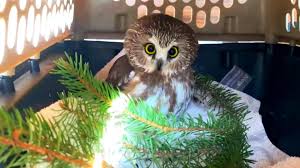 Better days will come shining through

The arrival of the Rockefeller Center Christmas tree was a mindful image of a devastatingly toxic past year. Making its introductory appearance, the iconic evergreen spruce looked like how America felt; worn down and in disrepair. But just when it seemed as if the tree, and the world, had more than enough of the seemingly endless nightmare that 2020 could throw its way; a gentle reminder of hope was found nestled within its branches.

In the spirit that is the holiday season, a Northern saw-whet owl having survived a grueling road trip, given the nickname Rocky, and posing for some endearing photo ops; sooner rather than later, took flight and flew free into what we all hope and pray will be a happier new year.

When president-elect Biden takes the oath on Jan. 20, 2021, democracy’s journey continues. Staged distraction and street theatre spin will no longer divert from serious statecraft. Securing our right to vote, and making that vote count, is a challenging new beginning to what will be a lot of solution-driven hard work. The nation and its structural framework – its constitution, rule of law, and sacred oaths — will no longer be broken, abused, and left for future generations to revive.

First and foremost, guided by an independent declaration of constitutional governance, an era of statesmanship and diplomacy with dedication and devotion will employ experienced, competent, genuine, and responsible leadership. We will set into place sustainable groundwork for a solid foundation where, through pursuit and effort, all can prosper and achieve their best lives.

Democracies around the world acknowledge that active barbarity through violent brutal means is archaic, obsolete, and unrepentant. Unfortunately, like strangers in a strange land, we continue to bear witness to a whole political party apparatus giving up, and giving in, to dictatorial anti-democratic foreign adversaries who utilize governmental power against their own citizenry with ruthless inhumane lawlessness and corruption.

Using a lure of promised superiority through religious authoritarian fervor and ethnocentric bias – Trump Republicans redlined Americans into an us versus them, good versus evil ideology. Conservative anti-government doctrine, divisive manipulation, and false information intended to mislead has weakened our nation to the point that it is literally making itself sick to death by wrongfully claiming medical science, and a viral pandemic, ineffective. At present, this White House – incapable of taking any responsibility – has, once again, conveyed to its citizens only rash, inept, reckless judgement which has led to the latest spike in COVID cases.

GOP officials, whose weaknesses and willingness to collaborate with the president out of a semblance of loyalty, or perhaps a fear of rant filled revenge tweet reckonings, have stayed on board the Trump/Pence down bound train of which there may be no escape due to mutually conflicting or depending conditions – better known as a Catch-22.

For the here and now far-right radical Republicans who believe they are still in on the con; faith as persuasion has become raw ambition, power a pretense of omnipotence, and as for greed and avarice – GOP representatives need no incentive when it comes to easy money.

America is a united construct. Protecting and defending the planet through stewardship, we declare liberty for all. We pursue happiness for the common good.

We grant to others the freedoms of truth made self-evident. We are a diverse American skin. We find reason in the belief that until all of us are safe, none of us are safe.

We will never be owned by militant threats, harassment, or hate filled speech. We will not cower. We will not falter.

With strength, faith, and resolve we will construct the better world that is in reach for all of us. We will be judged by the content of our character, the quality of our service, and our relationship to humanity.

With Florida in my heart, and Georgia on My Mind, here’s to better days ahead.

In remembrance of From the Left writer and mentor Marvin Jacobson, and a life well lived in service to others.