FROM THE LEFT- The Daily Commercial: A very American resolution 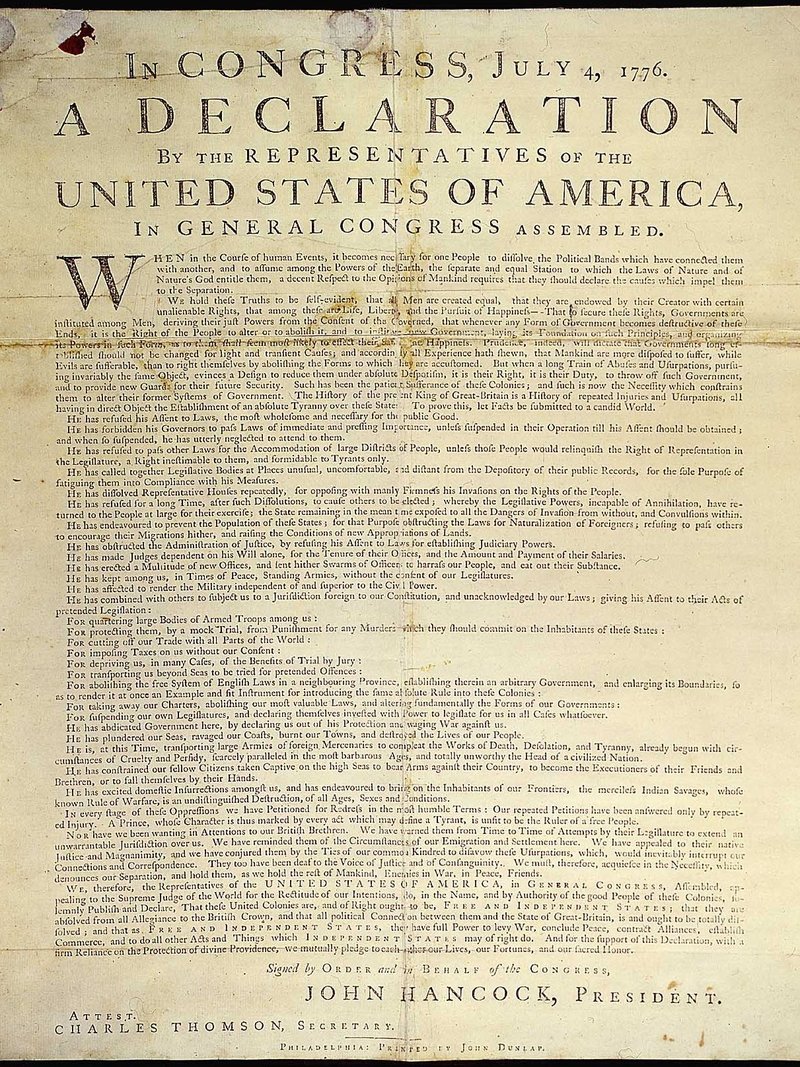 As I began reading, I was struck by how relevant it is to today’s situation. The reason for the document was to declare our separation from the King of England. It contains 26 grievances to support independence from the monarchy.

Most of us are familiar with the beginning, the part we learned in school, “When in the course of human events, it becomes necessary for one people to dissolve the political bands which have connected them with another…” Secondly, “We hold these truths to be self evident, that all men are created equal…” It sets up the bold aspirations of the writers to become free to create their own destiny. But it is when they begin to list the charges to support their declaration that the parallels with today begin to come into focus. This could be the guide for today’s Articles of Impeachment used to remove presidents and other government officials.

Number One: “He has refused his Assent to Laws, the most wholesome and necessary for the public good.” President Trump doesn’t think the laws pertain to him. He has stated publicly many times that “I can do anything that I want.”

Number Seven: “He has endeavored to prevent the population of these States: for that purpose obstructing the Laws of Naturalization of Foreigners; refusing to pass others to encourage their migrations hither, and raising the conditions of new Appropriations of Lands.” Trump has promised to build a wall, even attempting to misappropriate defense funds to do so and has ordered the mass incarceration of thousands of innocent children at our southern border.

Number Eight: “He has obstructed the Administration of Justice, by refusing his Assent to Laws for establishing Judiciary powers.” Trump has repeatedly forbidden everyone from talking to congressional committees and refuses to turn over requested documents. Undeniable obstruction of justice.

Number Thirteen: “He has combined with others to subject us to a jurisdiction foreign to our constitution, and unacknowledged by our laws; giving his Assent to their Acts of pretended Legislation.”

President Trump has signed hundreds of executive orders in an attempt to bypass Congress and the entire balance of powers.

Number Sixteen: “For cutting off our Trade with all parts of the world”: Trump’s cancellation of NAFTA and China trade agreements has adversely affected industries, particularly farming.

Number Twenty Six: “He has excited domestic insurrections amongst us”, Trump seems to really enjoy the “wrestling match” nature of his rallies and frequently promotes violence from the podium. He has incited mailbox bombings, an uptick in ethnic violence and white nationalism.

Conclusion: “In every stage of these Oppressions we have Petitioned for Redress in the most humble terms: Our repeated petitions have been answered only by repeated injury. A Prince whose character is thus marked by every act which may define a Tyrant, is unfit to be the ruler of a free people.” Trump abusively bombards anyone who criticizes him.

Of the 26 grievances in the Declaration of Independence, a full 20 apply to the Trump Administration.

It appears that we have come full circle, back to a time that we must walk in our ancestors shoes and once again declare our independence from a monarchy. Hand in hand with our constitution, our declaration is impeachment. Our collective New Year’s resolution must be to honor the wishes of our ancestors and not allow this to happen again.

Our Declaration of Independence should never be sold for a dollar, for it is priceless.