FROM THE LEFT- The Daily Commercial: A Democratic loss, more profound than election 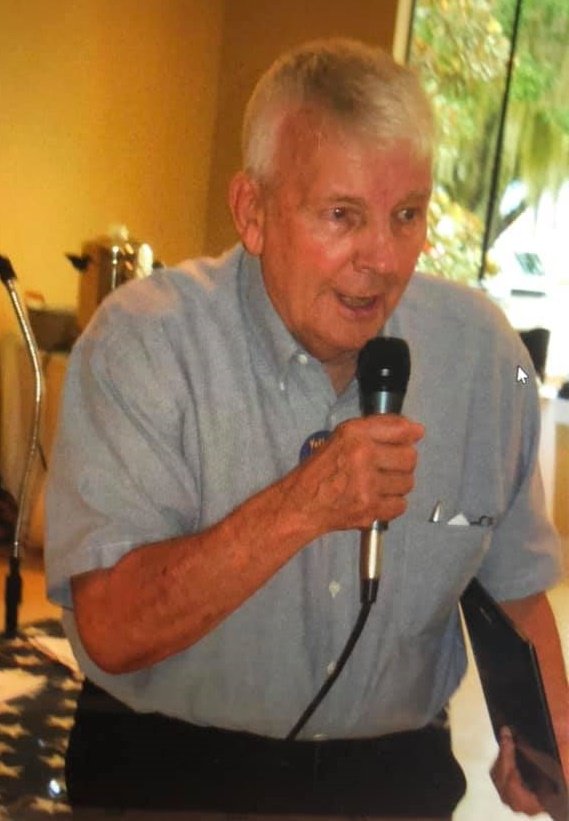 From the left or from the right, one thing on which we can all agree is that 2020 has been a horrible year. And the bad news just seems to keep coming. Last Sunday we lost one of our own. ‘From the Left’ writer Marvin Jacobson has passed away.

Most people who had the pleasure of getting to know Marvin Elmer (Jake) Jacobson pretty quickly came to learn a couple of important things about him: If a joke was good enough, he had no problem delivering it to you more than once and he was a damn proud Democrat.

They were among many enduring qualities – hard-working, tough, kind, accepting, understanding, fair – that he took with him until the end.

Ever the activist, Marvin, 85, died Sunday, Nov. 15 – the result of a series of medical crises he endured after suffering a fall while putting up Biden/Harris signs in the predawn hours of Election Day. President of the South Lake County Democratic Club from 2006 to 2011, he was always open to educate and debate about American history, usually with a pocket-sized U.S. Constitution available for anyone who wanted or needed it.

He grew up in Minnesota and was a lifelong fan of the Minnesota Gophers and Twins. He also managed to find joy from watching the Minnesota Vikings. He maintained an encyclopedic knowledge of those teams.

His interest in sports wasn’t limited to sideline viewing, however. He was an avid and competitive athlete throughout his life. He excelled in football, basketball and track while in high school, and many years later served as president — and one of the top players — of the Clermont Shuffleboard Club.

Professionally, Marvin was a high school history teacher and coach, and later worked for the Florida Department of Corrections.

He was considered an expert on the Second Amendment and led many lectures on the topic. He also was an occasional speaker at the Unitarian Universalist Congregation of Lake County and was an award-winning writer. He displayed his writing skills with guest editorials in several news publications, including the Orlando Sentinel and Leesburg Daily Commercial, the latter for which he created and managed this “From the Left” political opinion column.

He was instrumental in the recent expansion of the Kehlor Recreation Center for seniors in Clermont.

He was an original member of the South Lake Philosophers club and never hesitated to express his thoughts on any concept.

Marvin believed in liberty and justice for all — a principle that drove his activism. He was presented with the Democrat of the Year Award for Lake County during his tenure as president of the South Lake Democratic Club.

He is survived by a host of family and friends sprinkled across the country with a heavy concentration here in Lake County.

Obituaries enumerate the things of note in a life: birth, education, career and family, but they rarely touch on the essence of who they really were and what they meant to others, in this case, my long time friend. How do you say goodbye to a friend? Saying goodbye to someone whom you looked forward to seeing at events and whose long discussions you cherish is the hardest thing that we must do as humans. It leaves a hole in your heart that soon replaces the overwhelming sadness as it begins to fill up with beautiful memories. Some holes are bigger than others. His thoughtful contributions will be sorely missed by the readers of this column.

Fellow writer Kathy Weaver said, “Jake has left an amazing legacy with his knowledge and writing skills, he has encouraged and supported a diverse group of writers that have written ‘From the Left’ columns for the Sunday edition of the Daily Commercial for over 3 1/2 years.”

Columnist Patty Jackson wrote, “Jake always supported and encouraged me in whatever endeavors I undertook, especially my ‘From the Left’ articles and feel blessed to have had him in my life.”

And columnist Gary Clark said, “Jake, as a friend, coach, inspiration, made each of us, our community and our lives better. As members of the SLDC, we can honor him by continuing his fight for those things he fought for.”

Columnist Choice Edwards perfectly describes Jake when he said, “Jake was a philosopher who embodied and practiced his favorite word: probity”.

Marvin Jacobson was a constant presence in Democratic politics in Lake County.

The Lake County Democrats have lost their North Star.