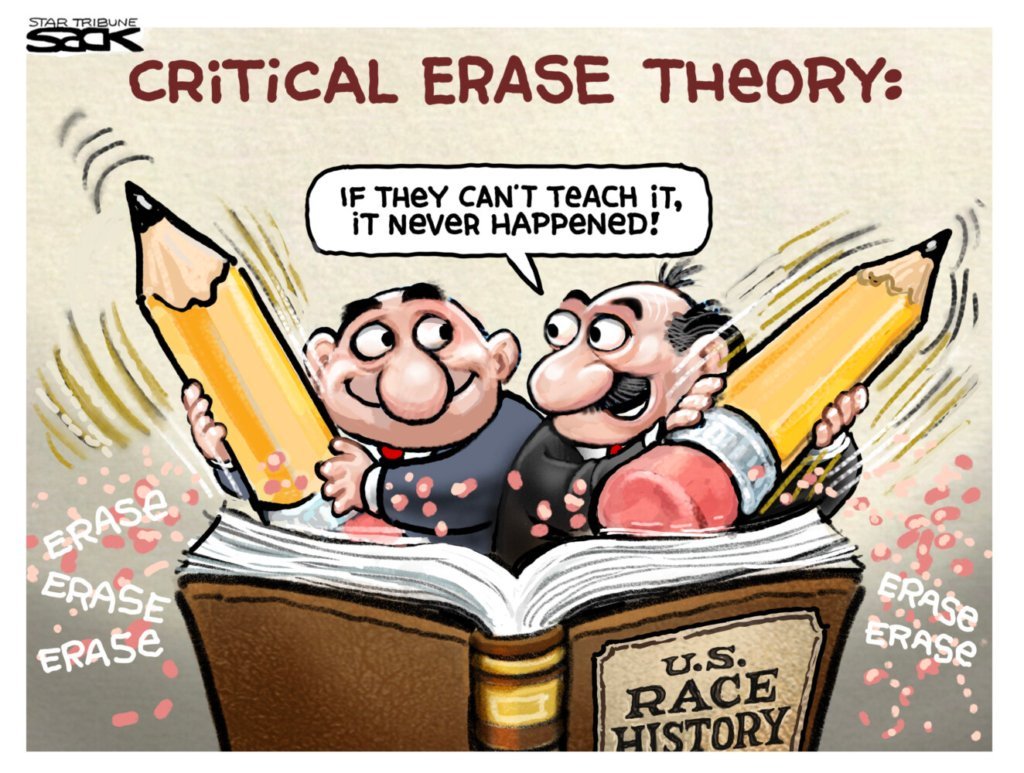 From the Left- The Daily Commercial: Honesty: The answer to the critical race theory hype

Honesty may seem a bit too much to ask from a history that has been carefully crafted to cover our many sins in glorious narrative about greatness. After all, our heritage is at stake.

So cleverly woven is the fabric of deception that we do not even think about the meaning and context of the words “Look away!” exclaimed not once but three times in the southern traditional anthem “Dixie.”

We mustn’t dwell on that dark part of our past — the beatings, cruel lashings of the whip to the point of disfiguration, even the chopping off of feet when some enslaved black (we dassn’t call them person) made one too many attempts at freedom.

Besides, dredging up these horrors, along with the murder of injuns [1.] in order to take their land, will just add to the grievances and animosities felt against white people. We just need to move on. Or so we are told. Spending time talking about these atrocities from some best-forgotten past can only lead to our hating each other, our country and even ourselves. Thus speak the new “truth-sayers” of today.

1. “Injun” is a pejorative for “American Indian,” which itself reveals white European self-aggrandizement to the point of being incapable of understanding what is right in front of one’s own face. Think about it: a bungled bureaucratic report by the Genoese Christopher Columbus to the Spanish crown on his discovery of the “new world” still has us, 500 years later, calling the people who lived here “Indians.” And, instead of listening to who they actually were, we decided to call this place “America” after the Florentine map-maker Amerigo Vespucci and to claim the land for God and king.

I guess everybody has their own version of the truth. But here’s what I know. There’s no rug big enough to sweep all this stuff under. And, even if there were, putting hurtful things out of mind or sight doesn’t make them go away. They are not only still there, but being reproduced in iterations down through the years, the hurt still being generated by our misguided mythology of superiority. (Speaking strictly as an old white guy, mind you.)

The healthy thing for us to do, both spiritually, morally and in a very practical and pragmatic way, is to face the truth and deal with it. Just be honest. Being “brutally” honest is not required. In fact, we can eliminate brutality altogether when we face our collective relationships in a more honest way.

When we no longer need to feel superior or to cloak our misdeeds in pseudo-religious concepts of exceptionalism, we free ourselves to begin healing from the moral and other injuries inflicted. We can then start forging a new, much healthier foundation for relationships, based in equality, with folks who have been harmed. We can actually begin to live into our founding ideals as a country, which state “all men (I say persons) are created equal.”

As a Pre-K teacher, I constantly struggled against the tyranny of low expectations, not only in racial contexts but with “special needs” children. To me, all children have special needs, and no two children should ever be taught in exactly the same way. The point is, we all need to expect the very best from each other. And when we wear blinders that don’t let us truly see one another, it damages the possibilities of our relationships — harming not only others, but ourselves as well.

So, when I hear about “critical race theory” being taught in our public schools, I wonder what people are talking about. I have the feeling it’s not about some law school-level course on structural racism within the context of our legal system.

Maybe people are really saying, “Don’t bring up the uncomfortable parts of our history.” But if we value and tell people’s stories equally regardless of age, race, wealth or gender, why does this have to be billed as a socialist or communist plot to destroy capitalism and the American way?

Couldn’t it just be that we are finally growing into our ideals as an America that can truly be great?