Have you ever wondered what a “Listening Session” is like with Daniel Webster, the Republican Congressman serving Florida District 11? 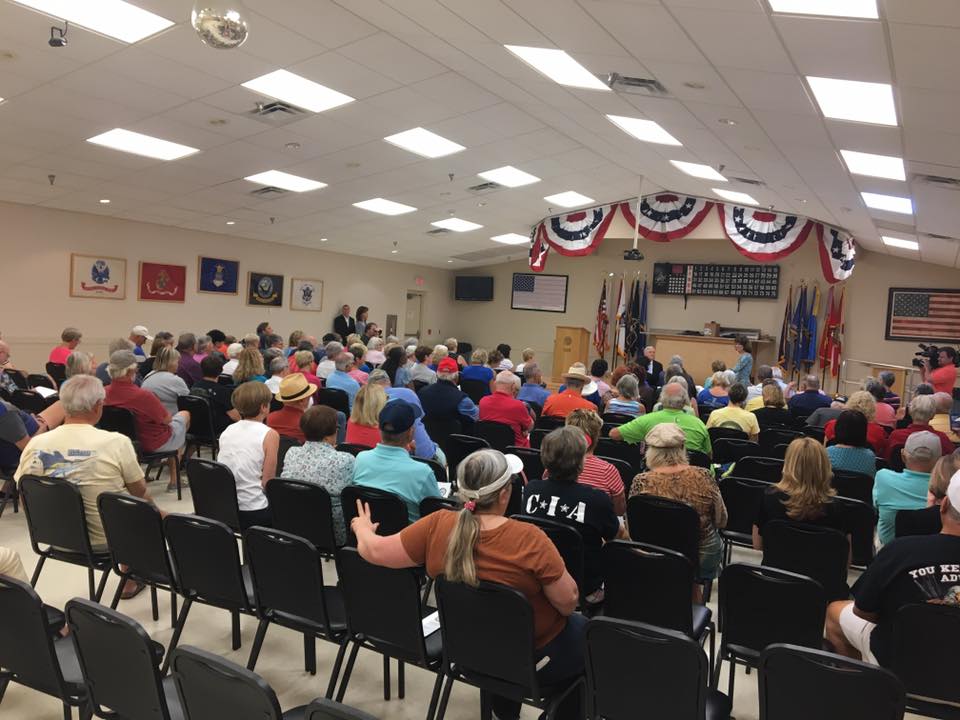 Here is a summary of the Listening Session held on August 23, 2017 in Howey-in-the-Hills:

This Listening Session was not posted on Webster’s website, and, apparently, it was not announced in the local papers.  However, the Lake County Republican Party knew about this session as early as August 15th and sent an email blast about it to Republican voters.

The Listening Session started at 8 a.m.  Webster explained that he was here to listen, that everyone would get a chance to talk, and that he would answer questions at the end.  He placed no time limit on any individual speaker.  However, at 8:20 a.m., his aide announced that the listening portion of Webster’s visit would end in eight minutes.  Everyone who wanted to speak did so, but the last few speakers spoke hurriedly.

In addition to five uniformed policemen, about 30 people attended and about 20 people spoke.  A microphone was passed up and down the rows of seated attendees.  All of the attendees were civil, except for one attendee who asked, “When will we lock her up?”

As expected, given the make-up of the audience, most of the comments were supportive of Trump or the conservative agenda.  Here are some of them:  Republican Congressmen need to support Trump and work together; Obamacare and government health care is bad; we need to weaken unions; we should not tax or regulate the sale of gadgets that suppress gun noise; and people out of work should not get foodstamps.  However, six people made progressive comments: we need Medicare for all; don’t send more troops to Afganistan; don’t slash the EPA budget; and please represent everyone, not just the wealthy corporations.

During the comments from the attendees, Webster took no notes and made no reply.  At 8:32, he gave a speech about the services his four offices provide to individual constituents, and made these policy statements:

He supports Trump’s agenda: Repeal and replace Obamacare, Tax Reform, and Infrastructure.  Replacing Obamacare and lowering the corporate tax rate from 35% to 10% will improve our budget and give us the money to make infrastructure improvements.

Government services are driving up the national debt.  To balance the budget, we must cut spending.

Under the House bill to replace Obamacare, no Floridians would lose Medicaid.  Only people in states where Medicaid was expanded will lose coverage.  Obamacare is imploding.

The session ended at 8:55 a.m. Webster gave the audience no opportunity to question his statements.

Photo from the Lady Lake Listening Session in April 2017