FROM THE LEFT- Daily Commercial: The 2nd Amendment is the most misunderstood 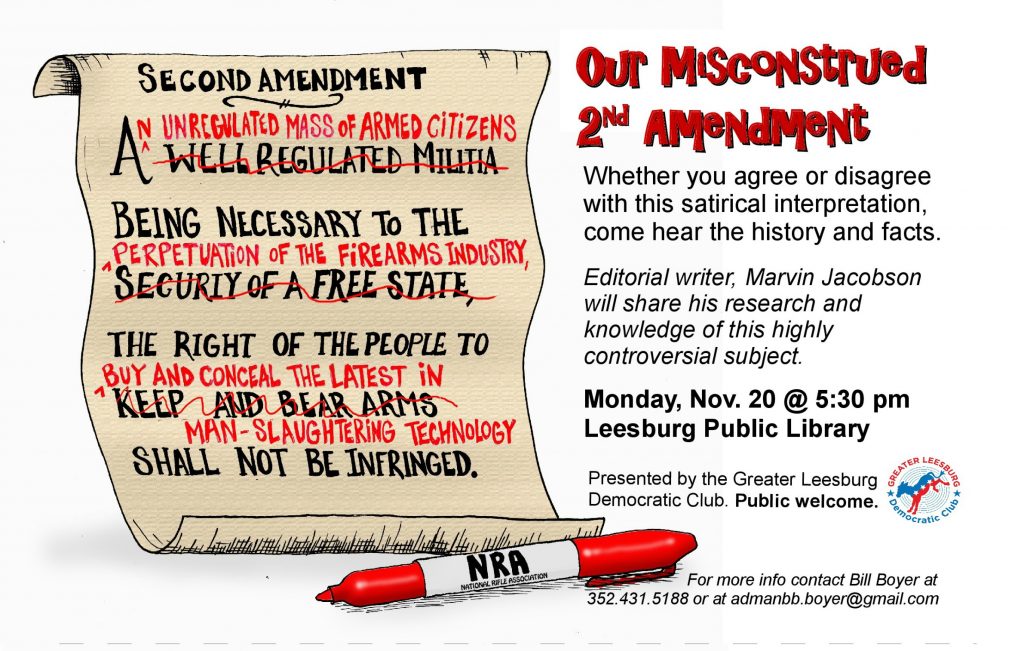 The 2nd Amendment is the most misunderstood amendment, with so many myths about its purpose.

To understand the amendment one must have knowledge of the proposed versions and slave patrols which had been in existence since 1704, operating under state laws and used for only one purpose, to control the slaves.

The most popular myth is the belief that the 2nd Amendment was written so people could take up arms against a tyrannical government. No evidence exists that Congress wrote an amendment giving the people the right to own guns so they could overthrow their government.

Congress (not founders) in the summer of 1789 wrote the 2nd Amendment in select committees with a considerable debate. Different versions were presented and debated. The first version by James Madison read: “The right of the people to keep and bear arms shall not be infringed; a well armed and well regulated militia being the best security of a free country; but no person religiously scrupulous of bearing arms shall be compelled to render military service in person.”

A select committee returned a new version: “A well regulated militia, composed of the body of the people, being the best security of a free State, the right of the people to keep and bear arms shall not infringed; but no person religiously scrupulous of bearing arms shall be compelled to bear arms.” Free country was changed to free “state,” because the South felt “country” would not cover their slave patrols.

The next version read: “A well regulated militia, composed of the body of the people, being the best security of a free state, the right of the people to keep and bear arms shall not be infringed, but no one religiously scrupulous of bearing arm shall be compelled to render military service.” “Compelled” to bear arms was changed to “military service.”

Article 1: Section 8 of the Constitution gave Congress the power “to provide for organizing, arming, and disciplining, the Militia.” On May 8, 1792, four and a half months after the 2nd Amendment had been approved, Congress passed the National Defence Act, which established a uniform, well-regulated Militia throughout the United States. They were able to arm the militias with guns owned by citizens because of the 2nd Amendment, which clearly was the intent of the amendment by Congress.

The act required “every free able-bodied white male citizen of every state between the age of 18 and 45 to be enrolled in the militia.” Every citizen so enrolled and notified, “shall within six months, provide himself with a good musket or firelock, a sufficient bayonet and belt, two spare flints, and a good knapsack, a pouch with a box therein to contain not less than twenty four cartridges, suited to the bore of his musket or firelock, each cartridge to contain a proper quality of powder and ball.”

The Supreme Court in D.C. v Heller in 2008 ruled for the first time by a 5-4 vote that the 2nd Amendment applied to the individual right to bear arms. The ruling made possible the slaughter of innocent people with military grade weapons.

Marvin Jacobson is a Clermont resident.